By Zeeuws Veilinghuis 24 juni 2014 No Comments

Last auction we sold two beautiful Balinese drawings by Willem Gerard Hofker (1902-1981).
Although many South East Asian collectors were bidding, they were eventually sold to an American buyer.

The catalogue texts were written by Gianni Orsini, co-writer with Seline Hofker of the recently published book ‘Willem Hofker’.

‘…The oval shapes of their faces with the expression of uncommunicated knowledge, their glossy skins, the supple grace of their bodies, rising from their undulating robes, their fluent gestures, were interpreted by him as the manifestation of a perfect beauty. (…) Mainly because of the infinite repetition and despite the warmth of the colours, the result still appears to be the somewhat cool observation of a very romantic reality.’ (review of the exhibition of Hofker’s work at Arti & Amicitiae in a Dutch newspaper, July 12, 1946)

This drawing, signed and dated three times, and in a style that is so typical of Hofker’s late Balinese work, was made 4 months before his internment in the Japanese camps. There are no other works known to have been made by Hofker of this particular girl. Consequently, it was most probably exhibited at Arti & Amicitiae, Amsterdam, June 29 – July 21, 1946, as there
was one drawing, entitled ‘Ni Sibih’.

The current lot is an example of the drawings that Hofker made of Balinese girls in a dancing pose. Because it is almost impossible to capture the typical stature of a rapidly moving dancer, he usually based these drawings on photographs. Hofker started doing this around 1942. The illustrated picture on this page shows the photograph that Hofker must have used. 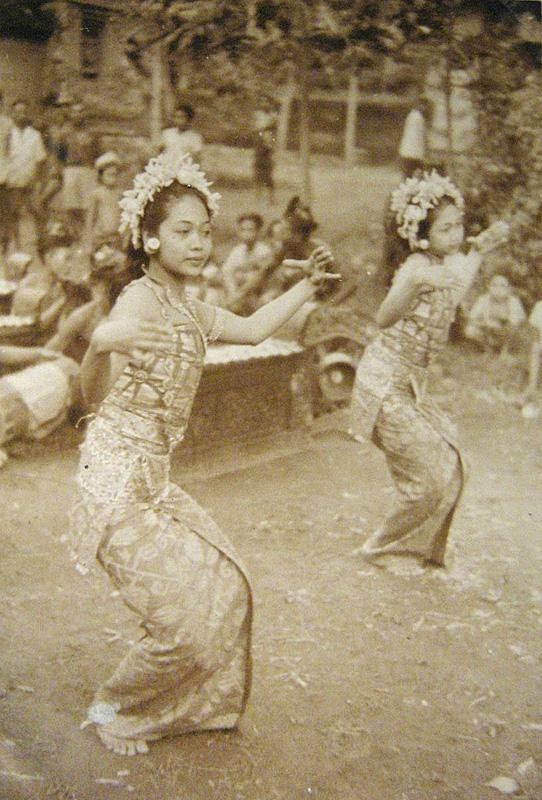 Portrayed is Ni Tjawan, who was a famous Legong dancer, together with Ni Sadri and I Rindi. She was also well-known for her performance of the Panji Semirang (Butterfly Dance). According to the title, Ni Tjawan is seen here in Legong Kebyar, a dance performed by two almost identical young girls (as can be seen on the photograph). The term Kebyar (‘the Process of Flowering’) in this case refers to the Gong Kebyar, the specific type of Balinese gamelan music that accompanies this dance, with its explosive changes in tempo and dynamics. In the background, a gender (one of the Balinese gamelan percussion instruments) can be seen.

A very similar drawing is known, entitled ‘Ni Tjawan’. It was probably made around 1943, and does not feature the abundant use of gouache highlights like in the current lot, which is quite typical of Hofker’s commercial Makassar work. To compare, this almost identical drawing is illustrated in:

More information about our auctions of Indonesian paintings (twice a year):