By Zeeuws Veilinghuis 13 juni 2014 No Comments 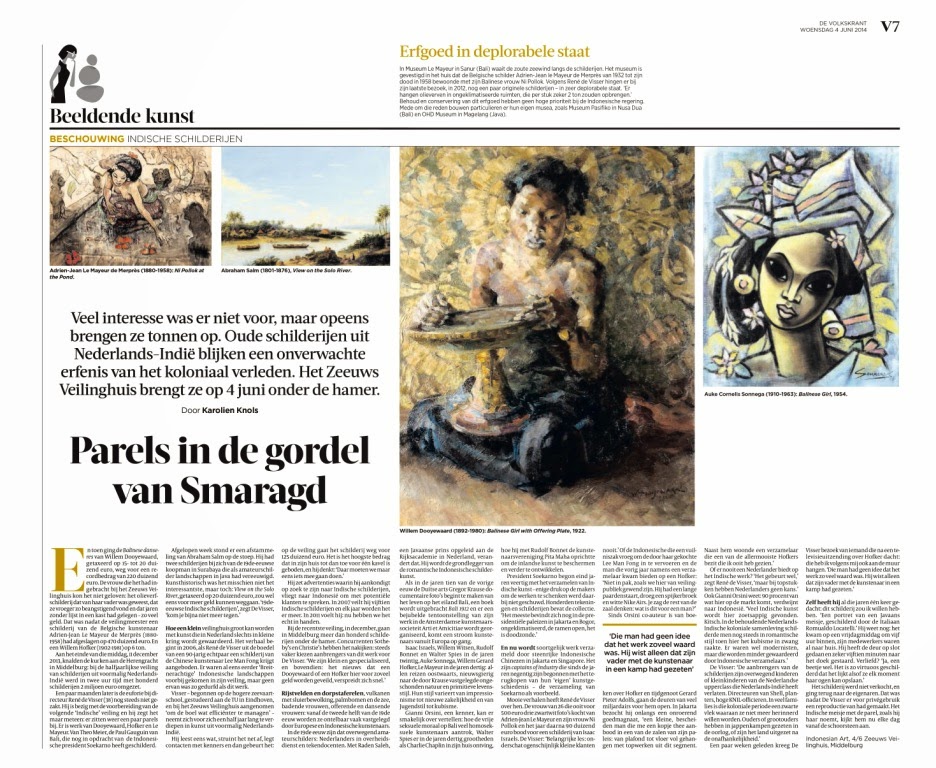 In the past, there wasn’t that much interest, but all of a sudden they are selling for hundreds of thousands of euros. Paintings from the former Dutch East Indies prove to be an unexpected heritage from our colonial past. Zeeland Auctioneers are auctioning some of them on June 4.

And then, Dooyewaard’s Balinese Dancer, which was estimated at 15,000 to 20,000 euro, was sold for a staggering 220,000 euro. The lady consignor couldn’t believe it; the oil painting that had belonged to her father, that had frightened her so much, and had been put away in a closet without a frame…. So much money. This was after the auctioneer had sold a painting by Adrien-Jean Le Mayeur de Merprès for 470,000 euro. And a Willem Hofker for 600,000 euro. Later that afternoon, on December 11, 2013, there was reason to celebrate at the Herengracht in Middelburg; at the half-yearly sale of paintings from the former Dutch East Indies, in two hours time a revenue of two million euro was made with some hundred paintings.

A few months later, the feeling of euphoria still has not diminished for René de Visser (38), CEO of Zeeland Auctioneers. He is preparing the next ‘Indonesian auction’ and tells us upfront: there are some pearls coming up again. There is work from Dooyewaard, Hofker and Le Mayeur, but also from Theo Meier, the Gauguin of Bali, who has painted for the Indonesian president, Sukarno. Last week, a descendant of Abraham Salm visited Zeeland Auctioneers. He had two oil paintings of this 19th-century painter, who had painted the landscape of Java as an amateur artist. Art historically maybe not the most interesting work, but still: View on the Solo River, estimated at 20,000 euro, might be auctioned for more than that; ‘19th-century paintings are hard to get these days’, says de Visser.

It’s remarkableto see an auction house of modest size become leading, auctioning art that is only appreciated by few. It all started in 2006, when an inventory was offered to René de Visser, that included a painting by Lee Man Fong, an Indonesian-Chinese artist. A few comparable Indonesian landscapes had been offered in the past, but never were they as bold as this one. Visser, trained as an engineer at the Eindhoven University of Technology, and employed at Zeeland Auctioneers ‘to manage things a bit more efficiently’, decided to study the art of the former Dutch East Indies for half a year. He read, searched the internet, got acquainted with experts in the field, and then… the Man Fong was sold for 125,000 euro. At that point, it was the highest amount ever paid for a single lot at Zeeland Auctioneers. De Visser’s conclusion: ‘we should probably focus a bit more on these works.’
He prepared ads in papers and magazines, announcing his quest for Indonesian paintings, and flew to Indonesia to meet potential clients. In 2007, he auctioned 15 Indonesian paintings, and each subsequent year, numbers doubled. In 2011 he really felt they were in the lead.  The most recent auction, last December, boasted more than a hundred paintings. Competitor moguls like Sotheby’s and Christie’s don’t seem to stand a chance; more and more, consignors choose De Visser to have their paintings auctioned. De Visser: “We are small and specialised, and above all; news spreads fast when a Dooyewaard or Hofker is sold for this kind of money.”

Ricefields and kampong scenes, vulcanoes in the mist, palm trees and the sea. Bathing women, offering women, dancing women; from 1850 onward, these themes were being visualised numerous times by European and Indonesian artists. During the 19th century, they were mostly amateur painters; Dutch public officials and drawing teachers. Raden Saleh, a Javanese prince who was trained at the Royal Academy of Arts in the Netherlands, changed that. He has become the patriarch of Indonesian Romanticism. In the early 20th century, the German physician Gregor Krause took beautiful pictures of life on Bali, and published a book about it, called Bali 1912. This publication and a successful exhibition of his work at the Amsterdam Arti & Amicitiae propelled a group of European artists to travel to the Dutch East Indies.
Isaac Israels, Willem Witsen, Rudolf Bonnet, and Walter Spies in the 1920s, Auke Sonnega, Willem Hofker, Le Mayeur in the 1930s. All had travelled eastward, curious to see the nature and natives that Krause had so beautifully immortalised. Their styles varied from Impressionism to ‘Neue Sachlichkeit’, from Jugendstil to Cubism.
Gianni Orsini, an expert, can tell great stories; on how the liberal sexual moral attracted a lot of gay artists, on how Walter Spies had famous guests in his Bali home, like Charlie Chaplin, and how Spies co-founded the Pita Maha art society, to protect, and develop native art.

In the late 1940s, Indonesian president Sukarno started collecting Indonesian art- with some subtle pressure on the artists’ shoulders to donate the pieces. The collection has grown to some hundreds of paintings and drawings. Most of them are still in the Presidential Palaces in Jakarta and Bogor, without air conditioning or closed windows… a terrible pity.

And now, similar work is being collected by wealthy Indonesian-Chinese collectors in Jakarta and Singapore. All of them captains of industry, who have started buying back their own art heritage since the early nineties, with the Sukarno collection as their standard.

René de Visser has some wonderful stories; about the 26-year old lady who bought some black/white pictures of Le Mayeur’s wife Ni Pollok for 500 euro, and the year after bid up to 90,000 euro for a painting by Isaac Israels. De Visser: ‘Never underestimate a seemingly small potential client.’ Or the Indonesian lady who asked for a plastic bag to transport the Lee Man Fong she had just bought.

Now that Orsini has co-authored books about Hofker and his contemporary Gerard Pieter Adolfs, doors to many multi-millionaire homes are opened. Recently, he visited one of them in Jakarta: ‘a modest man who offered me a cup of tea in one of the rooms in his palace. From floor to ceiling, the walls were covered by the best works from this segment. His neighbour owns one of the most beautiful Hofkers I have ever seen.’

Is there any Dutch collector bidding on these works? ‘It does happen’, says René de Visser, but the Dutch don’t stand a chance when the top lots are for sale. Gianni Orsini also knows: 90 percent of what is offered here, goes on a one-way trip to Indonesia. ‘A lot of Indonesian art is considered very sweet.’ In the conservative Dutch East Indies society, most artists painted in a romantic style when Cubism was in favour here. There were some modernists, but they are less sought after by Indonesian collectors. De Visser: “The consignors of such paintings are mostly children or grandchildren of the Dutch upper class that had left the Dutch East Indies. CEOs of Shell, high-ranked KNIL officers, plantation owners. In a lot of families, the colonial period is one they would rather not be reminded of. Parents or grandparents have been put in camps during the war, or have been expelled after the independence of Indonesia. A few weeks ago, De Visser was visited by a gentleman who, after seeing an item on television about Hofker, thought to himself: “I’ve got something like that on the wall!” ‘This man had no idea the work was that valuable. He only knew that Hofker had been in a Japanese camp with his father.’

Over the years, there has been one occasion where De Visser considered acquiring a painting. ‘It’s a portrait of a Javanese girl by the Italian painter Romualdo Locatelli.’ He still remembers that the work arrived on a Friday afternoon at 5 PM, when his employees had already gone home. He decided to lock the door and spent at least 15 minutes to stare at the painting. In love? ‘Yes, a bit. It has been painted so magnificently, that it seems that she could raise her eyelids any moment.’
The painting remained unsold and returned to the owners. But not before De Visser had brought it to a professional photographer to have it reproduced. The Indonesian Girl with the Pearl, like he calls her, now stares at him from the chimney every day.
Indonesian Art, June 4, Zeeland Auctioneers, Middelburg (NL).

(Caption)
Art heritage in terrible condition
In Museum Le Mayeur in Sanur (Bali), the salty sea wind is blowing on the paintings. The museum is actually the house that Belgian painter Adrien-Jean Le Mayeur de Merprès inhabited from 1932 until 1958, with his Balinese wife Ni Pollok. According to René de Visser, when he last visited the museum in 2012, there were still a few original paintings being displayed, in quite terrible condition. ‘Oil paintings are displayed in areas without any air conditioning. Each of these works are probably worth at least 200,000 euro.’ Preservation of this artistic heritage does not seem to be a priority for the Indonesian government. Partly because of this, private collectors have built their own museums, like the Pasifika Museum in Nusa Dua (Bali) and the OHD Museum in Magelang (Java).