By Zeeuws Veilinghuis 20 mei 2016 No Comments 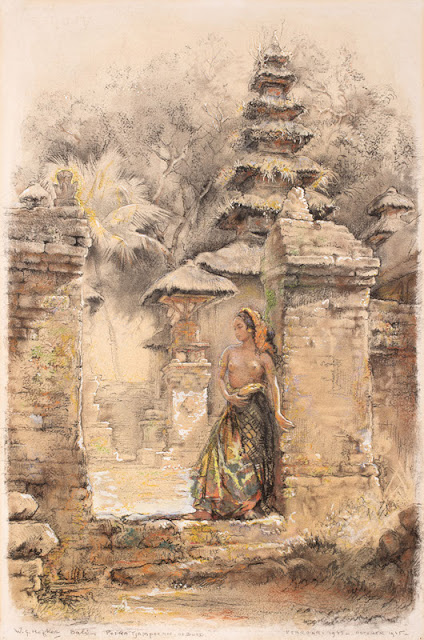 When this drawing of the temple, Pura Gunung Lebah, also known as Pura Campuhan, was made in February of 1943 Hofker had already been living his fourth year on Bali. This sacred 8th century temple, located in the Campuhan valley, only a few minutes’ walk from Hofkers humble home at Abangan, is prominently situated on a jutting rock at the confluence of two tributaries of the Cerik and Wos river. The valley is a magical and beautiful location with huge trees and abundant tropical plants. Secluded lies the temple in its depth, with the sound of the rushing water in the background. In this gorgeous setting Hofker created multiple artworks with a central role for the temple, basking in sunlight.

This presented lot, titled Bali, Poera Tjampoean, Oeboed and dated Februari 1943- October 1945, shows the impressive seven- stepped Meru (pagoda) rising high above a Balinese beauty. The girl is soft in tone but elegant and proud in her posture. Draped only in a colorful sarong, while standing in the Candi bentar (split gate). It is a masterpiece of superb draughtmanship created in a time of great turmoil, due to the Second World War, and only 10 months before Hofker was deported by the Japanese to an internment camp in Paré-Pare on the island of Celebes. In this short period of insecurity, Hofker made some of his best Balinese artwork. The image of this young girl appears in most of them. Her name is Ni Ketut Kenjoeng and she still remembers that she posed for the artist Willem Hofker. Her likeness is seen in 7 of his drawings and in 8 known paintings until today, dated from 1942 up to the end of 1943.

In this particular drawing Hofker positioned the girl slightly out of center against the right side of the gate with a twisted torso, resembling an ancient Hellenic sculpture. Hofker admired these sculptures as a student in 1920 during a three-month trip to the Louvre in Paris. As one can see, he placed her left arm out of the shade by giving it more exposure with a single stroke of gouache to enforce the brightness of the tropical sun. Her hand touches the rough stone and becomes one with the overall picture. This way, Hofker created a stage for the most sacred inner part of the temple, called Jeroan as it lights up in the morning sun.

The second date, being October 1945, as well as the English spelling of the title on the verso, were probably added to emphasize that he had retouched it for the purpose of selling. In October, when the war had ended, Hofker was reunited with his wife Maria Hofker-Rueter, and was living in Makassar. There, he received great attention for his art by the Australian liberators. Eventually, this drawing was sold in Amsterdam after the artist returned to The Netherlands. Hofker revealed his comprehensive talent with this drawing of the Pura Campuhan with Ni Ketut Kenjoeng. He was phenomenally good at depicting architecture. A specialist in portraits, and in topographic cityscapes.

A similar version of this presented lot is a drawing, portraying Ni Goesti Made Toewi standing in front of the same temple, made in 1943(1). It goes together with another drawing of just the temple, dated July 4th 1943(2), which is on permanent display at the Neka Art museum in Ubud, Bali. And a painting on canvas identical to this offered lot, except for the positioning of the right arm of Ni Ketut Kenjoeng, shown on the cover page of the last book about Hofker.