By Zeeuws Veilinghuis 12 april 2016 No Comments
De Indische veiling van 8 juni 2016 bevat een schilderij van I. Wayan Sadia met een bijzondere provenance. De eigenaar schrijft hierover het volgende.
In the summer 1965 my parents Lin Jaldati (singer) and Eberhard Rebling (pianist, writer and musicologist) traveled to Indonesia. It was a big concert tour of three months around Southeast Asia. Indonesia, Korea, China. My father did research for his book Die Tanzkunst Indonesiens.
In their memoires they wrote how they left Indonesia at  August 30th 1965. At the airport, they were presented a large farewell present in cardboard cylinder by the Indonesian Minister Njoto. Four months later, in December 1965 he was shot. Njoto (1925–1965) was a senior national leader of the Communist Party of Indonesia (PKI), who joined the party shortly after the country’s decleration of independence and was killed following the 1965 coup attempt. 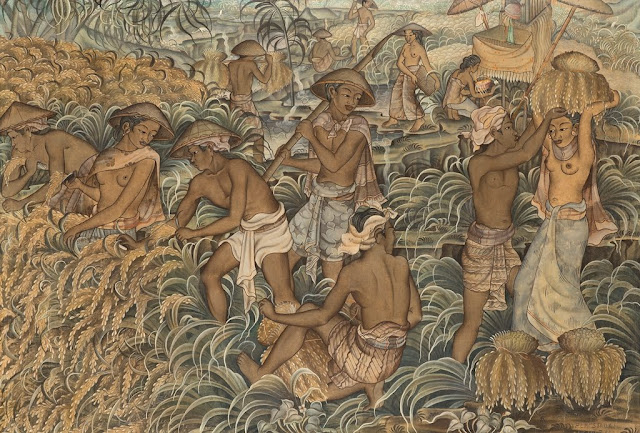 My parents opened the package when they returned to Berlin in October 1965. The beautiful painting is signed by I WJ SADIA, Penestanan, Ubud, Bali also known as I. Wayan Sadia. It was hanging in my parents livingroom over the grand piano for more then 30 years.
Meer informatie over onze veilingen van Indonesische / Indische schilderijen:
René de Visser
Zeeuws Veilinghuis
Herengracht 74
4331 PX  Middelburg
0031 (0)118-650680
www.zeeuwsveilinghuis.nl
www.facebook.com/zeeuwsveilinghuis