By Zeeuws Veilinghuis 23 mei 2016 No Comments 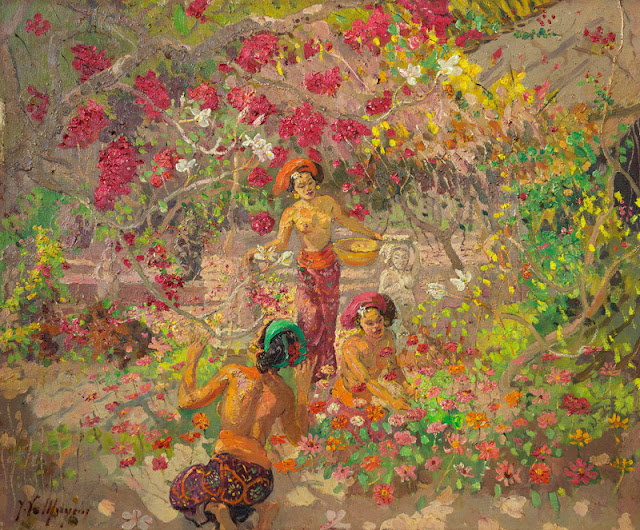 During WW II Mr. Martijnse and his wife stayed in internment camps.
In this period the painting was stored in Jakarta in a house of friends.
In 1948 they went back to the Netherlands and took the painting with them.

When Jean Le Mayeur, a Belgian artist from noble descent, arrived in Bali early 1932, he was enthralled by what he saw.Although he was 52 years old, and an experienced traveller, Bali met all the wishes he could ever devise. Venice, North Africa, Istanbul, Benares, Tahiti, Colombo, Madagascar, nor any other exotic place in the world could beat the magic of Bali. Meeting the famous Legong dancer Ni Nyoman Pollok (1917-1985), and marrying her in 1935, only confirmed that belief. In a paradise he and Pollok created for themselves, they were host to many tourists, and at the same time did not have extensive contacts with other European painters. Between 1932 and 1942, Le Mayeur managed to organize four exhibitions of his work in Singapore. The couple survived the hardships of World War II without any serious problems. As a Belgian, Le Mayeur was not put in a Japanese camp, but merely placed under house arrest, which he did not really mind.

Despite several setbacks after the war, like falling from his horse in 1948, being assaulted and severely wounded by twelve(!) thugs in 1951, and a hernia attack in 1956, Le Mayeur kept his focus and, maybe as a therapy for his physical setbacks, managed to produce works of art that radiated the sunny side of life. In 1951, National Geographic Magazine reported that ‘Le Mayeur has found his own heaven on earth together with his dancer wife Pollok’, and that ‘the Le Mayeurs hospitality is unending.’

Le Mayeurs garden was a key element in his oeuvre. In a letter from Bali, Le Mayeur describes the importance of the garden of his Sanur beach residence: “I organized my home exactly as I liked it. I intended to surround myself with nothing but beauty. I planted a mass of bougainvillea, frangipani, hibiscus and all around the cottage I put groups of intertwining plants. I built little temples, completely made of white coral, dug little ponds in which the reflections of all the Gods of Hindu mythology can be seen among the sacred lotus flowers. The two temples are surrounded by approximately two hundred of these little sculptures, which have integrated with the flowers whose silhouettes are drawn on the purple and pink tropic skies.”

The current lot is a magnificent example of the garden that Le Mayeur made into a paradisical one. We see three women, two or possibly all depicting Ni Pollok, posing in the process of arranging and selecting flowers. The large red hibiscus and white frangipani flowers play a prominent role in the overwhelming composition. The standing woman, possibly Pollok’s friend Ni Ketut Reneng, holds a small offering basket to collect some of the flowers for their daily offering rituals. All three women have gold-thread woven wrong (hair cloths), with their frangipani and hibiscus adorned hair typically worn on one side, and they all wear golden subeng (earplugs). The painting exudes the meditative silence of nature; Le Mayeur creates a perfect balance between the three women and the flourishing garden foliage. 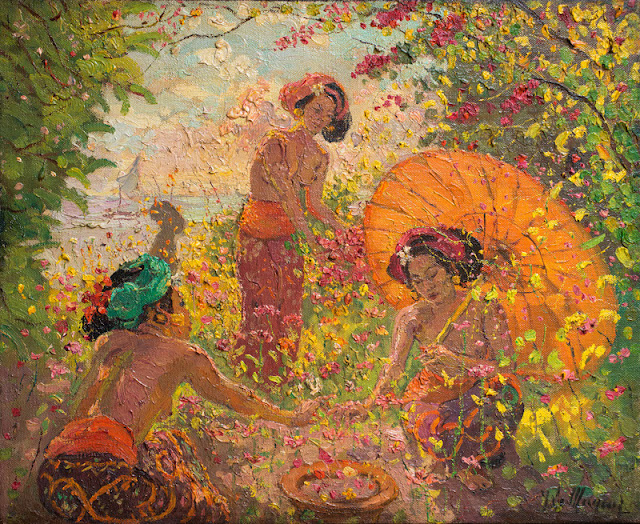 Lot 80 in this auction, another oil by Le Mayeur is quite comparable, in the sense that the same three women are featured, in a similar composition of the standing woman with orange wrong directing the
other two girls. The main difference, however, is the 180 degrees shift in viewing angle. We are not looking into the garden, but from the garden toward the beach. Subsequently, the setting changes dramatically, and so does the light, from frontal sunlight, reflecting on the back and shoulders
of the sitting lady on the left (lot 17) to a completely backlit situation, with the tropical sun magnificently lighting up the yellow flowers and especially the parasol of the woman on the right (lot 80). 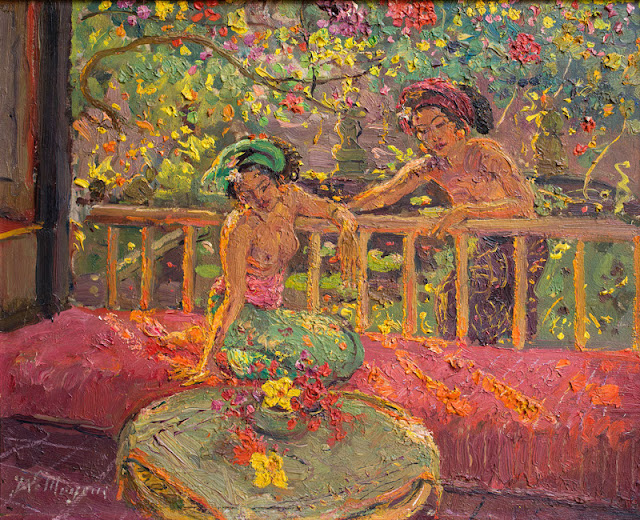 Lot 98 in this auction completes the trinity of settings that Le Mayeur favoured; the garden, the beach and now the interior of his Sanur home serves as center stage. The warm light and long shadows suggest a lazy afternoon or early evening setting. Two Balinese ladies are relaxing and
socializing. Le Mayeur mastered the art of creating an atmosphere, in which light and colour prove essential. These paintings stand testimony of Jean Le Mayeur being a true Luminist, and a true Epicurean. 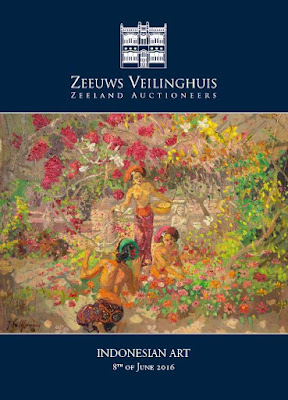 Click on the link below for the catalogue in pdf:
CATALOGUE INDONESIAN ART – JUNE 2016

More information about our Indonesian auctions: