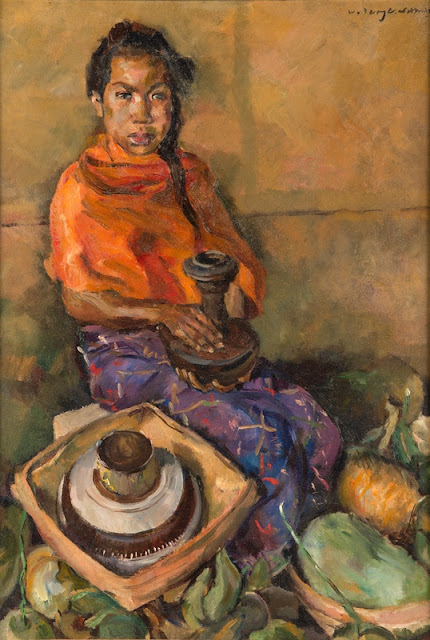 ‘We know: the passion for travel is an innate urge within us [the Dutch]. (…)…the young Willem Dooyewaard should absolutely be mentioned, an artist of great talent, but also a man with old-fashioned guts, a wanderer more dauntless than any of his predecessors.(…) Dooyewaard did not imagine of this fairytale island any Far Eastern dreams or phantastic depictions. He considered reality to be sufficient, and generously visualized this reality, in vigorously, broadly painted colour gamuts.’
(Theodoor van Lelyveld, Willem Dooyewaard op Bali, in Nederlandsch Indië Oud en Nieuw,
November 1936)

It could be argued whether Willem Dooyewaard (1892-1980) was a painter who traveled, or a traveler who painted. It is beyond any doubt, however, that Dooyewaard had a great passion for Asia, a passion he shared with a man who would become his soul brother, the Austrian painter Roland Strasser (1895-1974). Over a period of 20 years, between 1912 and 1932, Dooyewaard traveled through Asia. After finishing his studies at the Royal Acadamy of Art in Amsterdam in 1912, he spent 6 years at a rubber plantation in Sumatra, before he left for Bali. It was in Bali where he met and befriended Roland Strasser, in 1922. The two artists worked together and traveled together, defying hardships of all kinds, and observing things that were hardly ever observed before by Europeans. Dooyewaard and Strasser managed not only to visit, but also immortalize on paper and canvas the people of China, Mongolia, Japan, India, and Tibet, to name but a few. Bali, however, takes a special place in Dooyewaards body of work.

Dooyewaards Balinese oeuvre can be divided into three periods: his stays in 1920, 1922-23 and 1931-32. Stylistically, these three periods differ quite a bit; his 1920 work comprises small pencil sketches, with a documentary feel to them, similar to the sketches he made in Sumatra in 1918-1919; the second part of his Balinese oeuvre, after having met Strasser in 1922, is much more convincing: his sketches are bold and confident, his oils very determined, clearly choosing an almost divisionist style. Dooyewaard was greatly influenced by Roland Strasser. In 1931, shortly after marrying Jacoba Reinders in Japan, he enjoys a third stay on Bali, initially intended to be Willem and Jacoba’s honeymoon. During this period, his work developed into the impressionist style that Dooyewaard is best known for. His favourite themes are legong dancers (mostly portrayed full length onto one-meter high canvases), cock fighters, and girls portrayed as market vendors.

The current lot is a typical example of this third Balinese period. An almost identical painting, dated 1932, is illustrated on page 159 of W. Dooijewaard, A Dutch Artist in Indonesia (Dhaimeler, van Lelyveld, Eka, 1992). Elegantly posing for the artist, the same girl as in the present lot is sitting on top of the local fruit she is selling, like bananas, coconuts and rambutan (‘hairy fruit’). Possibly that same girl, together with another girl, is portrayed on page 161 on an oil painting, titled Kintamani Market. Kintamani is the northern Balinese town, just west of Gunung Batur, where both Willem Dooyewaard and Roland Strasser resided.

The Balinese market vendor in the present lot is shown selling fruit and vegetables at a typical Balinese pasar. She is gazing forward in a self-conscious, proud way, while holding a jar. Possibly, the girl is not merely selling fruit, but also pottery; this is not surprising, considering the existance of so-called Peken Payuk, traditional Balinese pottery markets, that this girl vendor might have been a part of. Painting in his matured manner, using spontaneous brush strokes and saturated, complementary colours, portraying reality within the perception of a ‘fairytale island’, and above all, sensing and capturing this expression of indigenous dignity, Willem Dooyewaard yet again proves to be an experienced traveler, a talented observer, and a full-fledged impressionist.