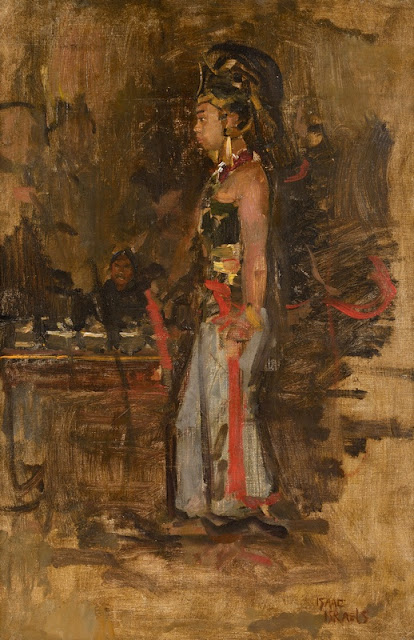 Isaac Israels is known to be one of the finest exponents of Dutch Impressionism. In 1898 and 1915/1916, he had already painted Javanese subjects (in The Hague), when in 1921 the idea came up
to actually visit the Dutch East Indies. Israels was encouraged by a number of his artist friends, like Jan Veth and Willem and Marie Witsen, to experience the mesmerizing beauty and colours of the Emerald Belt with his own eyes. He was a bit reluctant to make the 5-week boat journey, but in October 192 he would write to Jan Veth: ‘For better or worse – I come. I’ll take a pile of canvases with me, a tout hazard.’ Early December 1921, at age 56, he arrived in Batavia, and would travel through Java and Bali, returning to the Netherlands in October, 1922. It is said that Israels came back with some 30 oils and 50 watercolours, but presumably the yield from his Indies sojourn was much more comprehensive.

After arriving in Java, Israels was introduced to the two royal courts of Surakarta, the kratons of the
Mangkunegara and the Susuhunan. In these courts, Israels was enabled to draw and paint portraits,
gamelan orchestras, and court dances like the Bedhaya and Srimpi. The Srimpi or Serimpi is performed by four female dancers, symbolizing the balance between the four elements. They are traditionally young girls from noble descent, demonstrating soft movements and highly stylized positions of their hands and bodies. Their graceful and controlled gestures express modesty and refinement. The girls are trained to deliberately move very slowly, accompanied by serene gamelan music. Sri means king or queen, Impi means wish; Srimpi, in other words, represents the wish to live in honor and peace. It is originally performed in the pendopo (open hall) of the Javanese kratons of Yogyakarta and Solo.

Other Dutch artists have been inspired (strikingly also in and around the 1920s) to depict the srimpi
dance, e.g. Johannes ten Klooster (several woodcuts, 1919-1920), Hendrik Paulides (drawings and a
lithography, 1925), Jan Poortenaar (several etchings and oils, ca. 1926), and Johannes Gabriëlse, who
painted a magnificent portrait of a Srimpi dancer from Yogyakarta in 1921.

Israels, however, had already witnessed and painted the elegant beauty of the srimpi in 1898, during
the National Exhibition of Women’s Labour in The Hague (see Glerum, p. 57). In the current lot,
about 24 years later, and being in the country of the srimpi’s origin, he reinvents his vision on the
srimpi. Israels depicts a Srimpi dancer in one of the Solo kratons. In the background we see the gender player of the gamelan orchestra that accompanies the srimpi. The young girl is dressed in a traditional way, including a gilded leather tiara and black lacquered head dress. She is holding her two red garland-like cloths which serve to emphasize the dancer’s gestures.

The current painting perfectly demonstrates how Israels differentiates his level of detail. Known to have said he was ‘merely making drawings with paint’, the dark tones around the dancing girl are sketchy and dry. Clearly, these brush strokes have been put onto the canvas very quickly, in his signature ‘slashing’ way, just to capture the pose. The arms, tiara, highlights on the gamelan instrument, and especially the girl’s face however, have been treated with utmost precision. In this way, Isaac Israels, an observer like no other, was able to express a very pure sense of tranquility and self-control. Upon his return from Java, he wrote: ‘There is something mysterious in the atmosphere of this country that, once having left, one cannot imagine.’ Going far beyond a mere portrait, Israels managed to convey in a single dancing girl the mystery and the rich heritage of Javanese culture.