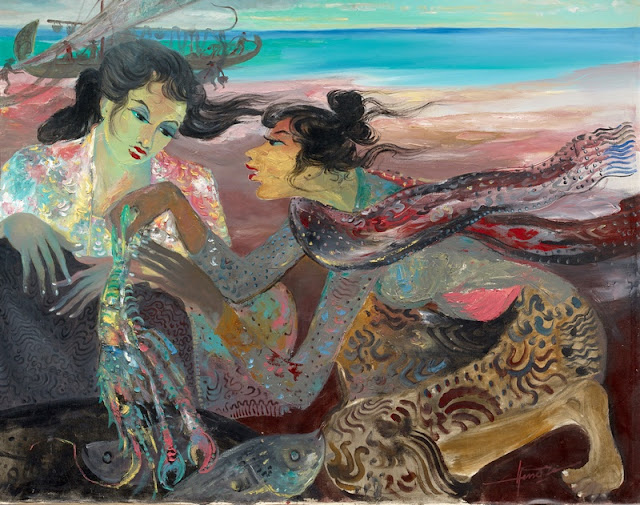 Provenance: Collection Jacob Vredenbregt, Jakarta, friend of the artist. Vredenbregt provided the materials that were needed to make paintings during Gunawans stay in prison. Purchased from Vredenbregt by the present owners in 1974.

Hendra Gunawan was one of the greatest modern artists of Indonesia. He is known for his caricaturist, colorful style of painting that draws on an expressionist background. A highly principled man, he was imprisoned for his communist beliefs, and his work kept out of the public eye for close to four decades.

Hendra Gunawan was born to Raden Prawiranegara and Raden Odah Tejaningsih in Bandung,
West Java. He began drawing very early on, using everyday objects such as fruits, flowers, and pictures of movie stars as his models. He had begun making landscapes by the time he was in the seventh grade, studying at Pasundan High School. Gunawan decided not to restrict himself to painting, and in 1938 began to teach himself sculpture. The painter Affandi was a big influence on Gunawan as well, and they were to form the “Kelompok Lima Bandung” (The Bandung Group of Five) with Barli, Sudarso, and Wahdi in 1950. During the Japanese invasion of Indonesia, Gunawan spent time teaching young students painting and sculpture. He held a one-man show in 1946 at the KNIP building in Yogyakarta. A few years later, he teamed together with a number of other Indonesian artists to create the Indonesian Fine Arts Academy.

Gunawan was eventually imprisoned in 1965 after there was an attempted coup against Sukarno.
His crime was to have been involved with The Institute of Popular Culture, which happened to be
associated with the ex-Indonesian Communist Party. He kept himself busy through his time in jail by
painting. There also exist sketches from his time there made in pencil or ink on paper. Gunawan was
eventually released in 1978 and moved to Bali. He was in the process of painting a selfportrait when he fell ill and died in 1983.

The oeuvre of Hendra mostly consists of symbolic themes, visualized in a surreal and multi-colored
setting of working people, mainly women. The wayang topeng was a beloved theme of Hendra too,
with the Javanese and Balinese masks embodying the symbolism and ancient culture of Indonesia.
Henda typically used pastels and saturated colors, and backgrounds in his paintings often include views of the rugged nature of Java and Bali.

In the current lot, we see a woman offering a lobster and some fish to another woman. In the
background we see a beach with a fishing boat, suggesting that the sea animals have just been caught.
The hard exterior of a lobster acts as a protective sheath and is symbolic of the guard that people tend
to put up in order to protect themselves. In addition to safeguarding, the lobster symbolizes strength
of character in the form of resolution, self-control, nobility, and regeneration. The woman offering the lobster is kneeling, looking determined, and she is painted in greyish tones, almost as a chameleon, clearly putting the emphasis on the woman on the left. The woman being offered the fresh lobster, has a slightly undetermined look in her eyes, as if she is wondering what to do. This painting might symbolize a woman and her ‘voice inside’ (being the kneeling lady), encouraging the woman to be resilient, untouchable, and powerful. It seems as if the woman accepts this encouragement. Despite her insecure gaze, her kebaya blouse and her skin tone have lit up, and her posture and hands could not be more elegant. With this painting, Hendra honors and celebrates the beauty and power of Indonesian women. 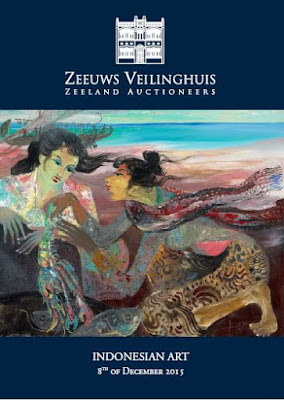 Click on the link below for the catalogue in pdf:
CATALOGUE INDONESIAN ART – DECEMBER 2015