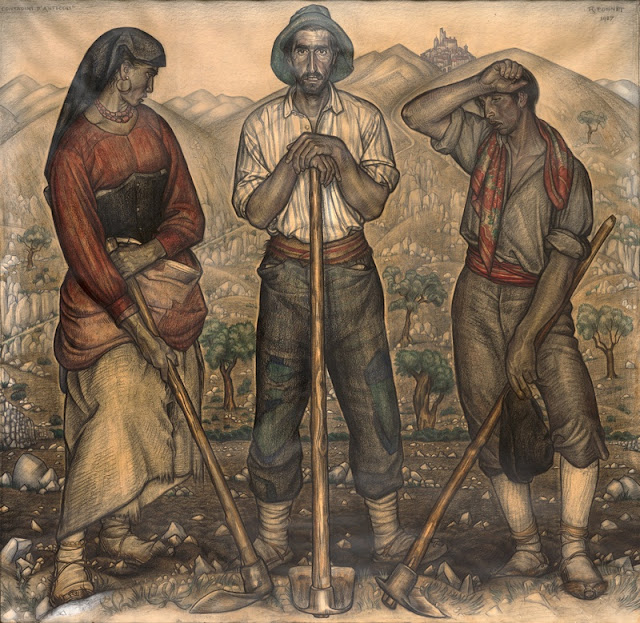 “This piece truly is a heroic ode to Labour. In a monumental manner, these three figures stand on the ruthless soil, with its jagged boulders. In the middle, the untiring fighter who refuses to be pushed back, ignoring adversity, looking straight ahead towards the future, that compels him not to give up the tethered battle. On his right, the woman that stares at the harsh ground in a resentful way. On his left, the exhausted young son, who is merely occupied with his own fatigue. (…) The background, which has shaped itself (sometimes a bit too deliberately) toward the contours of the three peasants, like the curving of the little mountain road running parallel with the boy’s arm, remains subservient and pleasing because of its fairylike atmosphere.”
(Jan D. Voskuil, reviewing Contadini d’Anticoli, in Op De Hoogte, December 1928)

Before Bonnet traveled to the Dutch East Indies in 1928, where he was to become an influential artist, he spent eight years in the small Italian town of Anticoli Corrado, just south of Rome. He was immersed in their culture, and portrayed the locals and their tough lives with great empathy. Not only the physical size of this work, with the peasants being portrayed in life-size (and betraying Bonnets background as a mural painter), but also the viewpoint that Bonnet has chosen, indeed give this work a monumental touch. When estimating the horizon, one can conclude that Bonnet has made this work sitting, which gives the 3 Anticolian models an even more untouchable, heroic appearance.

There is a paradox that makes the drawing intriguing. On the one hand, exaggerated proportions of
hands and arms, the roughness of the hatching in their faces, emphasizing their worn-out skins as a
result of working on the land all day, and the despair that exudes from their gazes. On the other hand,
there’s the fluent contour lines and the poses that seem to refer to heroes from Roman mythology.
Bonnets early Italian oeuvre, of which the current lot is so quintessential, is often compared to the
style of Jan Toorop (1858-1928). The dramatic visualisations, the thick outlines, the stylized form, and taking peasantry as a (metaphoric) theme, all resemble the work of Toorop.

Furthermore, it is well-known that Bonnet was an admirer of the Renaissance. Consequently, his body of work draws parallels with the art of Michelangelo Buonarotti (1475-1564), whom Bonnet
considered one of his greatest examples. In this case, the dramatic postures of the peasants seem to refer to ‘Gli Schiavi’, that Michelangelo made between 1520-1532. Made from Carrara marble, The Slaves are world famous, but contrary to the David, these sculptures are so-called non-finito (purposely unfinished), which gives them an exciting suggestive dimension. Especially the resting young man on the right has a striking resemblance to Michelangelo’s Dying Slave, now in the Louvre in Paris.

Rudolf Bonnet, in a letter to his parents, described his Anticoli Corrado oeuvre as “…the story of
the still classical peasantry of a people with such an ancient culture behind them. And a race which is
bound to disappear.” Mrs. de Roever-Bonnet, the artists niece, argues that Bonnet portrayed characters rather than individuals: “In Anticoli, he [Bonnet] is struck by the harsh life of the peasants, perceiving its beauty, and typifying them during their daily chores.” (op. cit., p. 77) In this monumental interbellum piece, the descendants of the ancient Roman culture are characterized
with a primitive beauty that will doubtlessly never disappear.