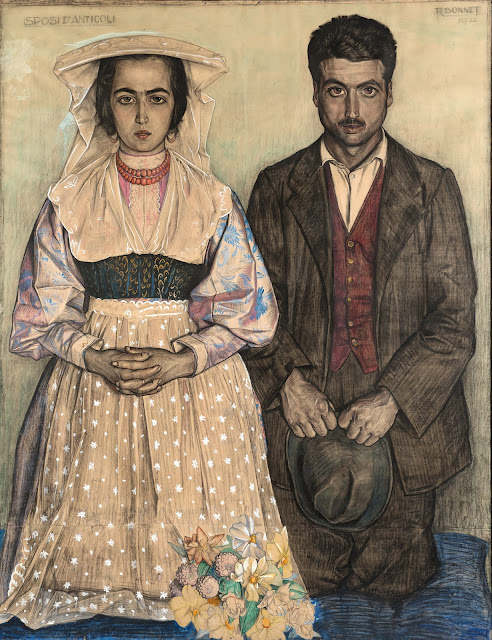 Before Bonnet traveled to the Dutch East Indies in 1928, where he was to become an influential artist in the Balinese art scene, he spent eight years in the small Italian town of Anticoli Corrado, just south of Rome. He was immersed in their culture, and portrayed the locals and their lives with great enthusiasm and empathy.

Not only the physical size of the current lot, Sposi d’Anticoli, with the newly-wed couple being portrayed literally larger than life (thus betraying Bonnets background as a mural painter), but also the viewpoint that Bonnet has chosen, drawing the two peasant models en face, it all gives this impressive work a monumental touch. The Italian husband and wife are portrayed in all their modesty, kneeling down, gazing at the painter, with an touching innocence and honesty in their eyes. Yet they seem somewhat reluctant to look at the viewer, not used to being models, and almost embarrassed to being drawn on a two-meter piece of paper.

“Diffidently kneeling, while the bride is about to pray, and the groom is holding his hat in a somewhat shy manner, these two earnest souls are united in Sacrament for all eternity and faithfully receive their benediction. Whoever worships the mystery of the union of husband and wife in these newlyweds, was experiencing an occurrence of holy souls in these Anticolians, and was giving the couple a priestly blessing through his pious painting. (…) In this noble work of art, the beauty of an absolute artist’s mind is revealed, both with gentle force and strong meekness.” (about Sposi d’Anticoli, in De Hollandsche Revue, 1926, p. 16-17 (op. cit.))

It is well-known that Bonnet was an admirer of the Renaissance. Bonnet considered Michelangelo Buonarotti (1475-1564) one of his greatest examples. In this case, however, Sposi d’Anticoli can be best compared to the style of Jan Toorop (1858-1928). The dramatic visualisation, using thick outlines, stylized form, using religious connotations, and taking peasantry as a (metaphoric) theme, all echo Toorops iconic oeuvre. There is also a resemblance with some of the striking portraits by Gustav Klimt (1862-1918). When taking a look at portraits of Mada Primavesi (1912) or one of Klimts last portraits, of Amalie Zuckerkandl (1917-1918), the effect of the sitter gazing incisively at the viewer, depicted at full-length, in life-size or even larger, draws obvious parallels to Sposi d’Anticoli.

Rudolf Bonnet, in a letter to his parents, described his Anticoli Corrado oeuvre as “…the story of the still classical peasantry of a people with such an ancient culture behind them. And a race which is bound to disappear.” Mrs. de Roever-Bonnet, the artists niece, argues that Bonnet portrayed characters rather than individuals: “In Anticoli, he [Bonnet] is struck by the harsh life of the peasants, perceiving its beauty, and typifying them during their daily chores.” (op. cit., p. 77)

Upon his temporary return in 1923, just before turning 28, Bonnet is able to exhibit his earliest works from Anticoli Corrado in The Hague, at the Kunstzaal Kleykamp. Sposi d’Antocoli is one of the more prominent works exhibited. Reviews are overwhelmingly positive, and visitors are most surprised to see such monumental work displayed by such a young and unknown artist. Perhaps the greatest compliment for Bonnet were the famous architect H.P. Berlage (1856-1934) and Jan Toorop visiting the exhibition. Knowing that Berlage had traveled to the Dutch East Indies a year before, and knowing that Toorop (being of Javanese descent himself ) would draw the portrait of W.O.J. Nieuwenkamp (1874-1950) only 4 months after the exhibition, and knowing that Nieuwenkamp would meet Bonnet in Italy a few years later and would be the one inspiring Bonnet to travel to Bali, Sposi d’Anticoli encompasses this circle of ‘Indies connections’, and consequently proves to be an essential factor in steering Bonnets career and art-historical importance.

Provenance:
– On loan (probably from the artist) to the Public Library, Keizersgracht, Amsterdam, where it was exhibited for years in the general reading room;
– Gifted by Rudolf Bonnet to the Institute of Social Studies, The Hague (NL), in 1965, where it was exhibited in their ‘Common Room’;
– Acquired from the Institute of Social Studies by the present owner in 1993.