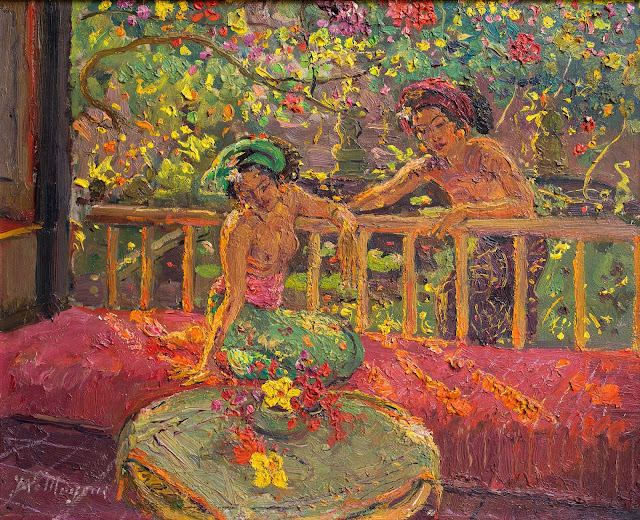 When Jean Le Mayeur, a Belgian artist of noble descent, arrived in Bali early 1932, he was enthralled by what he saw. Although he was 52 years old and an experienced traveller, Bali was all he could ever wish for. Venice, North Africa, Istanbul, Benares, Tahiti, Colombo, Madagascar, nor any other exotic place in the world could beat the magic of Bali. Meeting the famous Legong dancer Ni Nyoman Pollok (1917-1985), and marrying her in 1935, only confirmed that belief. In a paradise he and Pollok created for themselves, they were host to many tourists, and at the same time they did not have extensive contacts with other European painters. Between 1932 and 1942, Le Mayeur managed to organize four exhibitions of his work in Singapore. The couple survived the hardships of World War II without any serious problems. As a Belgian, Le Mayeur was not put in a Japanese camp, but merely placed under house arrest, which he did not really mind.

Despite several setbacks after the war, like falling from his horse in 1948, being assaulted and severely wounded by twelve (!) thugs in 1951, and a hernia attack in 1956, Le Mayeur kept his focus and, maybe as a therapy for his physical setbacks, managed to produce works of art that radiated the sunny side of life. In 1951, National Geographic Magazine reported that ‘Le Mayeur has found his own heaven on earth together with his dancer wife Pollok’, and that ‘the Le Mayeurs hospitality is unending.’

Le Mayeurs garden was a key element in his oeuvre. In a letter from Bali, Le Mayeur describes the importance of the garden of his Sanur beach residence: “I organized my home exactly as I liked it. I intended to surround myself with nothing but beauty. I planted a mass of bougainvillea, frangipani, hibiscus and all around the cottage I put groups of intertwining plants. I built little temples, completely made of white coral, dug little ponds in which the reflections of all the Gods of Hindu mythology can be seen among the sacred lotus flowers. The two temples are surrounded by approximately two hundred of these little sculptures, which have integrated with the flowers whose silhouettes are drawn on the purple and pink tropic skies.”

The current lot is a subtle showcase of the garden that Le Mayeur made into a paradisical one. We see two women. Ni Pollok, relaxing and socializing. The standing woman, possibly Pollok’s friend Ni Ketut Reneng, leans against a wooden parapet dat separates Le Mayeur’s house from the garden. It seems they are admiring the flowers on the small table that perhaps they themselves have just picked from the garden. Both women have gold-thread woven wrong (hair cloths), with their frangipani and hibiscus adorned hair typically worn on one side, and they both wear golden subeng (earplugs). The painting exudes the meditative silence of nature. We feel the ease of the moment with the golden rays of light shining through the bars of the parapet, magnificently lighting up the arms and clothing of the two elegantly posing ladies. The warm light and long shadows suggest a lazy afternoon setting.

Le Mayeur mastered the art of creating an atmosphere, in which light and colour prove essential. This painting stands testimony of Jean Le Mayeur being a true Luminist, with an unconditional love for Balinese nature and especially his Balinese muse, Ni Pollok.