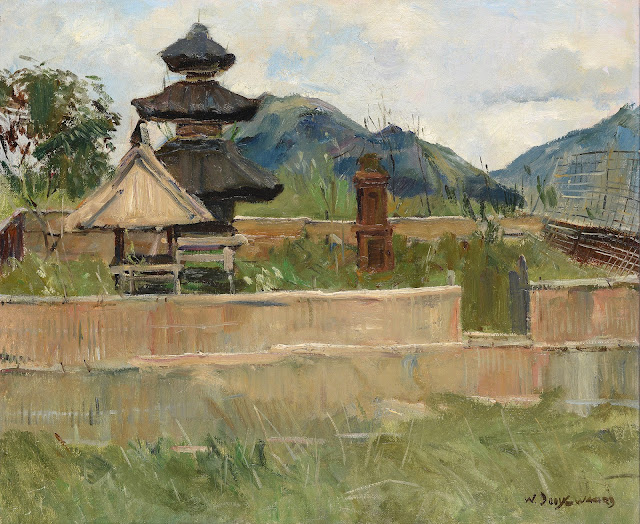 It could be argued whether Willem Dooyewaard (1892-1980) was a painter who traveled, or a traveler who painted. It is beyond any doubt, however, that Dooyewaard had a great passion for Asia, a passion he shared with a man who would become his soul brother, the Austrian painter Roland Strasser (1895-1974).

Over a period of 20 years, between 1912 and 1932, Dooyewaard traveled through Asia. After finishing his studies at the Royal Acadamy of Art in Amsterdam in 1912, he spent 6 years at a rubber plantation in Sumatra, before he left for Bali. It was in Bali where he met and befriended Roland Strasser, in 1922.

The two artists worked together and traveled together, defying hardships of all kinds, and observing things that were hardly ever observed before by Europeans. Dooyewaard and Strasser managed not only to visit, but also immortalize on paper and canvas the people of China, Mongolia, Japan, India, and Tibet, to name but a few. Bali, however, takes a special place in Dooyewaards body of work.

Dooyewaards Balinese oeuvre can be divided into three periods: his stays in 1920, 1922-23 and 1931-33. Stylistically, these three periods differ quite a bit; In the second period, Dooyewaard was greatly influenced by Roland Strasser. In 1931, shortly after marrying Jacoba Reinders in Japan, he enjoys a third stay on Bali, initially intended to be Willem and Jacoba’s honeymoon. During this period, his work developed into the impressionist style that Dooyewaard is best known for.

‘Many of Willem’s Balinese paintings were done during the three happy years they were to spend there. They avoided close contacts with the white population in the island and lived alone amidst luxuriant nature, fully accepted by the kind Balinese people. They understood them and loved their culture and customs, the highly mystical religious dances, the fascinating intense surrender of the dancers to their emotions and the beauty of the strictly traditional movements and figures, full of symbolism.’ (Koenraads, 1966, p. 167)

Kintamani is the northern Balinese town, just west of Mount Batur, where both Willem Dooyewaard and Roland Strasser resided. In those days, it was a place hardly ever visited by foreigners, who would stay south, in Denpasar and Sanur, or in the hills of Ubud. Strasser and Dooyewaard deliberately chose this place as their home, not only because they could work in peace, but also because there was an unspoilt, raw beauty that reminded them of their past sojourns through Asia.

Indeed, van Lelyveld was right, saying that Dooyewaard considered reality to be sufficient. He could see the artistic value of a modest temple compound with a three-roof meru (tower) and a small bale (pavillion), surrounded by some simple bamboo fences, and Gunung Batur in the background. It takes a great artist to make an attractive painting out of something, which at the time seemed quite common.

Painted with these light, spontaneous brush strokes in subtle earth and mineral tones, with the current lot Willem Dooyewaard proves to be an experienced traveler, a talented observer, and a versed impressionist.