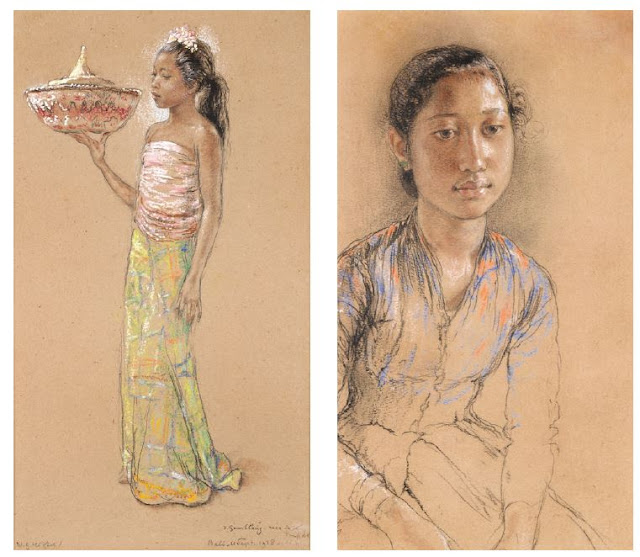 ‘At five o’clock we cycled to Pura Majapahit, where a ceremonial feast was taking place, for guests from Kuta, who came in wearing fabulous traditional adat dress. Women with small children, in colourful kains and with flowers in their hair, and with golden shaking flowers and lots of champacas and kenangas. We watched as they were sitting behind the pemangku, sprinkling their flowers before the gods, while praying. The hostesses built fabulous offerings, opulent still lifes with fruit. It was a quiet, intimate celebration.’ (from the diary of Willem and Maria Hofker, September 21, 1938, written by Maria Hofker-Rueter)

Hofker was well-known for his natural talent to capture the spirit of the sitter onto paper or canvas. It is no surprise that he was invited, only two years before making the current portraits, to paint an official portrait (‘staatsieportret’) of the Dutch queen at that time, Wilhelmina; this royal portrait proved the starting point of Hofker’s journey to the Dutch East Indies. The KPM (Koninklijke Paketvaart Maatschappij) invited him to make a journey (initially only 5 to 18 months!) through the Dutch colony, drawing his impressions, which in turn could be used by the KPM as promotional material. Hofker was delighted to receive such an invitation: ‘I heard today that I have been appointed “Tukang-gambar” (painter) for KPM in the East Indies for five months! Just like in thousand-and-one-nights! (including (…) fee and free travel!)’ (Willem Hofker, in a letter dated September 18, 1937)

In February, 1938, Willem and Maria Hofker arrived in Java, where they visited Batavia, Bogor, and Bandung. After four months they travelled to Bali, where they fell in love with the island’s culture and people. Hofker was fascinated by the rituals and dances of the Balinese, mostly performed by young girls. His models were more than often stunning beauties, both girls with a peasant background and from wealthy Balinese families. At first, Hofker had his models pose in a classic, European way, and made the composition more lively by using accessories like wood carvings, musical instruments or baskets for daily offerings. Over time, this developed into more dynamic compositions, involving several people and backdrops.

Sumina, the Javanese girl from Bandung, was the children’s nurse in the Fokker-Brand family, acquaintances of Willem and Maria Hofker with whom they lodged for several weeks in Bandung in April, 1938. It was one of just a few occasions that Hofker was able to make a portrait, as he discovered to his frustration that the Javanese were reluctant to have their portraits made because of their Muslim faith. He managed with great difficulty to persuade this children’s nurse, some street urchins and the gardener’s daughter to pose, but it was much less than he had hoped for (op. cit. 3, p. 136/24). The aloof appearance in Sumina’s face bares witness to this reluctancy. Moreover, realizing that the Hofkers stayed in Java for only four months, it needs no further explanation that Hofker’s Javanese work is extremely scarce.

Bali was much different in many respects. The Hindu religion did not forbid people being portrayed. Hofker was overjoyed: ‘…it is a pleasure to have at last an entire population at one’s disposal. (…) And you never need to play nursemaid as you do with all the little victims in Holland, who all become tired, restless or bored if they have to sit for a long time!’ (Willem Hofker, December 1938)

While living in Kerenang, Denpasar, from December 1938 til early 1940, Willem and Maria Hofker had an elderly cook who was assisted by a girl called Ni Gemblong. She was close friends with Ni Dablig, another girl often used as a model by Hofker, just like Gemblongs sister Ni Gambling.

In 1939, Willem made at least two oil paintings that portray Gemblong, one of which is now in the collection of Teylers Museum in the Netherlands, and on the cover of the 1978 book ‘Bali Gezien door Willem Hofker’ by Thea Kuiper-Weyhenke. One of the conte crayon drawings by Hofker of a beautifully subdued Gemblong, is on permanent display at the Pasifika Museum in Bali. It’s noteworthy that in September 1938, when the Hofkers were still living in Klandis Kedaton with René Gockinga (ref. lot 66), Gemblong did not know the artist yet. It’s a lucky coincidence (or is it…?) that Hofker specifically chose to depict her at the Pura Majapahit on September 21, 1938.

However ambivalent it may sound, Willem Hofker was a master of ‘suggestive detail’. He could visualize the anatomy of his sitters arms, hands and fingers with just a few scribbly lines of a razorsharp pencil. Both hands of Ni Gemblong have been drawn so delicately, it is instantly apparent that the beaded offering basket is no heavy object to carry. And like no other, Hofker would suggest the tropical light and heat by using highlights of white conte crayon, like in Sumina’s portrait, or white gouache paint in Gemblong’s.

However, there is one essential thing that makes the current lot truly unique; this is the only work of art by Willem Hofker known to combine portraits of a Javanese and a Balinese sitter, thus embodying the beauty of both cultures in one single frame.