By Zeeuws Veilinghuis 21 november 2012 No Comments

When thinking of high quality paintings by Indo-European artists, most people think about stars like for example Lee Man Fong, Willem Gerard Hofker, Rudolf Bonnet and Auke Sonnega. Lesser known, but not lesser in quality is Arthur Briët.

Our auction on the 12th of December 2012 contains a big masterpiece (77 x 96 cm) by this artist. Briët is very well known for his paintings with Dutch subjects. Many museums have paintings from him. Indonesian subjects are quite rare.

Briët was born on Java in 1867. His father died when he was one year old. After that he returned with his family to Utrecht, the Netherlands. He grew up and took drawing lessons from Jozef Hoevenaar, a quite famous artist. Later he studied in Antwerp and Paris. 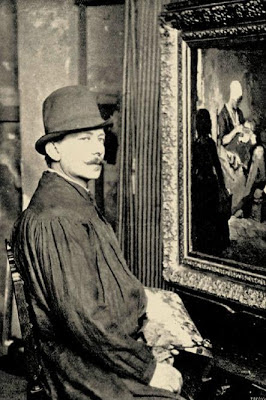 Paintings by him can be found in Musée du Luxembourg in Paris and in the Netherlands in Gemeentemuseum Den Haag, Centraal Museum Utrecht, Kröller-Müller Museum Otterlo, Van Abbemuseum Eindhoven, Singer Museum Laren and many more. He died in February 1939 at the age of 72.

More information about this auction: