By Zeeuws Veilinghuis 23 juli 2014 No Comments
Articles by Seline Hofker and Gianni Orsini.

When Willem Hofker (1902-1981) regained his freedom in September 1945 after two years of internment in several Japanese camps during the Second World War, he was reunited with his wife, Maria Hofker – Rueter (1902-1999) in Makassar were they resided for a few months. In this period Hofker produced paintings and drawings, utilizing previous Balinese models from his pre-war artwork that he managed to preserve.

His wife Maria, who barely survived similar women internment camps, failed to protect her
belongings, including the art that she possessed. Their art collection was reduced considerably
due to Allied bombings. In Makassar the couple had to rebuild their life and these new
drawings and paintings formed their main source of income. By that time Hofker was given the
opportunity to organise a sale exhibition, together with other European artists. At this stage he
already had expanded his collection to a large extent. The exhibition, held at Christmas time, was
an enormous success for Hofker. He managed to sell almost all of the work he contributed to the
event.

Her face is exquisite and magnificently portrayed, also her posture is gracefully put on the paper,
with accurate flowing lines. Hofker added highlights with gouache and bright colours using conté
crayon and watercolour. By doing so, he gave her costume and flower filled crown a golden glow,
while the Balinese textile appears as she is standing in the tropical sun. The prepared paper, with
the so called “spattering technique”, that Hofker developed during the war, is also used for this
drawing.

The Far East, in particular it’s people, landscapes and art, made a great impression on
Willem Hofker. He experienced Bali as a paradise of light and openness, warmth and especially

beauty. A love that he, in spite of the Japanese occupation, never lost.

“The Lègongs express the changing moods of the Gamelan and the happenings in progress of the drama, not only with movements of their legs, arms and torso; every finger, every toe is quivering in the most exacting of dances, the head is moving in a quite extraordinary way – which cannot be imitated without long training – and even the eyes are flashing all the time from side to side.”
(Arthur Fleischmann) (1)

Lègong is a dance traditionally performed by pre-pubescent girls in the palaces of feudal Bali. It originates from the early to mid-19th century, and involves two young girls accompanied by gamelan music. Around 1910, a so-called condong part was added; in this part, a male attendant accompanies the girls. The condong sets the scene and presents the girls with their fans. In the 1920s and 1930s, Lègong and its dancers became famous with the explosive growth of tourism in Bali. Until 1934,
Ni Nyoman Pollok (who was to become the wife of Belgian painter Adrien-Jean Le Mayeur de Merprès) and Ni Ciblun performed the Lègong. In 1934, their successors were Ni Cawan and Ni Sadri, with I Rindi as condong (2).

All three dancers, however young and innocent they were, would become living legends, Cawan for her interpretation of the Panji Semirang or Butterfly Dance, I Rindi for his impressive performance of the Kebyar. But first and foremost, these three pre-adolescent Balinese would be a legendary Lègong trio, taught by the dance and music master I Nyoman Kaler. Ni Cawan, Ni Sadri and I Rindi usually performed in Klandis-Kedaton (Denpasar), under a holy Waringin tree. For this reason, they were often referred to as ‘Lègong Klandis’. Ni Sadri and Ni Cawan were cousins. Sadri was even adopted by Cawan’s father. They lived together as twins, which made organizing and training for performances easier (3).

Not only Hofker, but also other well-known artists like Emilio Ambron, Miguel Covarrubias and Arthur Fleischmann were inspired to capture Ni Sadri’s stunning beauty in drawings, paintings and sculptures. In 1940, even a short movie was shot by an Australian news channel, immortalizing the mesmerizing movements of Sadri, Cawan and Rindi. 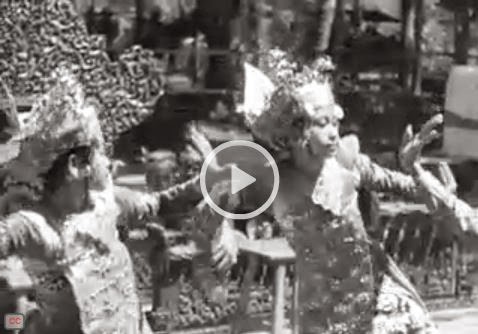 The current conté drawing by Willem Hofker portrays Ni Wayan Sadri in her traditional Lègong attire. “The always serious features of Sadri, the exquisite Legong-dancer”, to quote Arthur Fleischmann (4), are perfectly captured by Willem Hofker. There are actually several versions known to exist of this drawing, most of them in museum collections. A detailed drawing, dated 1938, and including a Barong mask and a gendèr in the background, was probably made for Hofker’s most important client, KPM, to be used as promotion material for the Dutch East Indies (5).

The conté drawing Hofker made ‘in vivo’, and most similar to the current lot, is dated September, 1938, but seems to have been reworked late 1945, and was eventually sold to the Dutch ‘Rijksprentenkabinet’ during the exhibition at Arti & Amicitiae, Amsterdam, July 1946, (6).

Another version is a drawing, permanently exhibited at the Agung Rai Museum of Art (ARMA), Ubud, Bali. It is dated April 2603, which means it was made for a Japanese officer in 1943, just over a year after Japan’s occupation of Bali (7).

The current lot is most probably made for the Makassar exhibition that took place in January, 1946, where it was to be sold to (mainly) Australian officers. This explains the English title (‘Lègong Dancer’). The rich textures of gouache and the emphasized English title in capitals all point in this direction. And yet again, it proves a powerful testimony to a legendary dancer in legendary times.

More information about our auction of Indonesian paintings: