By Zeeuws Veilinghuis 10 juni 2017 No Comments 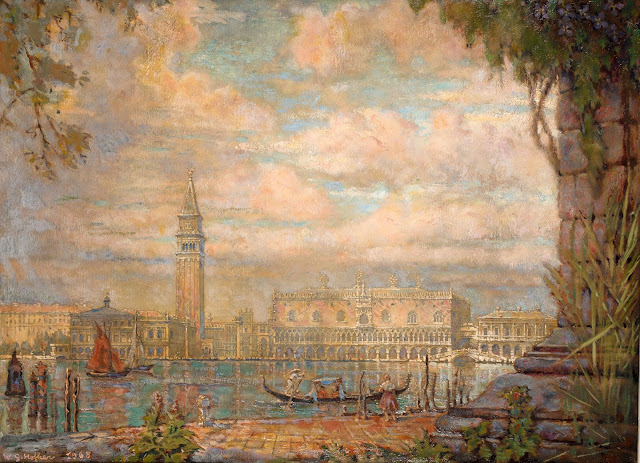 ‘…the […] views of Venice are particularly striking because of the way he manages to dissolve this city of marble into a diaphonous, intangible dream floating above the water.’ (Algemeen Handelsblad, April 5, 1962, at an Arti et Amicitiae, Amsterdam exhibition, honouring Hofker’s 60th birthday)

Born in the city of The Hague in 1902, Willem Gerard Hofker applied for the local Academy of Fine Arts at the age of 15. Shortly after that, he moved to the Royal Academy of Fine Arts in Amsterdam. He won second prize at the Prix de Rome in 1924, and became a well-known artist in the Netherlands during the 1930s. Hofker is mostly known for the body of work he made in Bali, where he and his wife Maria lived from 1938 until 1943. Hofker felt a deep emotional connection with his Balinese oeuvre, making it hard for him to sell any of it. Being childless, he even considered the drawn and painted portraits of the Balinese models his children. Having gone through the horror of war and Japanese camps, Willem and Maria Hofker returned to the Netherlands in 1946. The official portraits he made of queens Wilhelmina and Juliana helped to quickly regain his reputation as a portraittist. Although Hofker had a remarkable talent to capture the character of the sitter, it was merely a way to earn a living. He was not very sociable, and often ‘hid’ behind his easle. The models he really loved were tireless and patient; Nature and Architecture, both in the Netherlands and abroad.

In 1951, Rudolf Bonnet invited Willem and Maria to come with him to Italy. Bonnet had lived in the Italian village of Anticoli Corrado during the 1920s, before W.O.J. Nieuwenkamp (1874-1950) encouraged him to visit the Dutch East Indies. Eventually, when Hofker arrived in Bali in 1938, he met Bonnet, and they became close friends. ‘It was Rudolf who opened the mesmerizing doors of Bali for us, and helped us appreciate its beauty, both visible and elusive. In 1951, he also took us to Italy and shared the admiration with us, that he had for Italian nature and Italian art.’ (1) In the end, Maria and Willem would develop a great passion for Italy. In the 20 years that followed, the couple would make city trips to Rome, Assisi, Arezzo and Venice. Especially the latter deeply impressed Willem Hofker; more than half of his entire Italian oeuvre depicts Venice. Willem and Maria visit the ancient city in the northern Italian laguna many times between 1951 and 1970. In 1956, 1959, and 1961, Willem stays in Venice over a longer period of time, and makes numerous sketches and conté crayon drawings. The (rare) oil paintings were sometimes made on the spot, but were mostly done in his Amsterdam studio, based on sketches he had done during his trip. This also goes for the current lot, which is possibly based on a 1961 drawing (2). It was made from the island of San Giorgio Maggiore, which is well known for its breath-taking view of the ancient Venetian skyline. Hofker was sitting on a small square in front of the 16th-century San Giorgio Maggiore basilica church overlooking the Canal Grande. In the distance, the Campanile di San Marco, the Bell Tower of the St. Mark’s basilica, rises above all other monumental buildings; we catch a glimpse of St. Marks square (Piazza San Marco), with its two granite columns, showing Venice’s patron saints, St. Theodore and the winged Lion of Venice. The Palazzo Ducale, originating from 1340, built in Venetian Gothic style and the residence of the Doge of Venice, takes center stage. In the foreground, some sailing boats and one of the famous gondolas can be seen, among the hustle and bustle of tourists: ‘I savour the most beautiful dresses in passing. The lovely buildings are adorned with them and they pose whenever and for as long as I want!’ (Willem Hofker, August 1959, Venice) (3)

Whether it was done purposely or not, this painting might well be an interpretation of the early impressionists’ Venetian paintings, like the famous series of cityscapes by Claude Monet (1840-1926) that he made in 1908. The 1881 painting by Pierre-Auguste Renoir (1841-1919) is even identical in viewpoint, and also Adrien Jean Le Mayeur de Merprès (1880-1958) painted Venice from San Giorgio in 1919-1921. Hofker’s style is less impressionist, more documentary than the mentioned painters, but with a similar sense of imagination and interpretation. As I described in the epilogue of the book on Hofker, his primary focus was on portraying beauty, be it a girl from the Dutch province of Zeeland or from Bali, be it a Venetian palace or a Balinese temple. Hofker was a very associative person, sensitive to atmosphere, often comparing themes of beauty, and in awe of their parallels. ‘… I would not want to miss this silent hour in the life of the city, as the sun rises; the fresh coolness is reminiscent of the start of the day in the East Indies and a cup of coffee made by my hostess the evening before underlines the similarity…’ (Willem Hofker, August 1959, Venice) (4) The composition of the current lot, Palazzo Ducale, is even comparable to a 1938 Balinese drawing and painting by Hofker of the Pura Dalem near Batubulan (5). The compository element of a holy waringin tree on the right is comparable to the architectural element we see in the current painting. This element seems to be the edge pedestal of the 16th-century San Giorgio Maggiore basilica church, but in fact it is not. Whereas the Palazzo Ducale is painted in a perfectly truthful manner, the pedestal in the foreground is merely repoussoir; an occlusive element, made up by the artist to create a layered perspective. The pedestal and the foliage are even painted in blurry brush strokes, enhancing the sense of photographic depth of field.

Willem Hofker uses classic impressionist elements: a low horizon, suggesting the painting to be made en plein air, and the dramatic clouds competing with the medieval architecture that only takes up a modest part of the canvas; yet, interestingly, the style of this painting is quite romantic, and the composition quite narrative. This mixture of romanticism and impressionism creates a fascinating paradox. Be as it may, Architecture, Nature and Man, these three rudimentary themes that Hofker was so fond of, amalgamate in wonderful harmony in this magnum opus within Hofker’s Italian oeuvre.