By Zeeuws Veilinghuis 1 juni 2017 No Comments 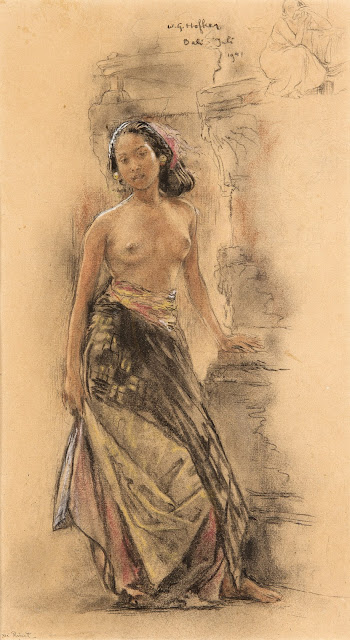 WILLEM GERARD HOFKER (1902-1981) ’Ni Rinit’, signed and dated ‘Bali juli 1941’ upper centre, conté crayon and pencil on paper. 45 x 25 cm.
Auction 8th of June 2017
In 1941, Willem Gerard Hofker (1902-1981) was producing work in a fast pace, finishing and starting a new drawing or painting on a daily basis. He was fully comfortable working on Bali. At the same time, he experienced the contrast with his home country could not be bigger as it was being torn apart by war and enduring its first year of German occupation since May 1940. Letters written by the Hofkers had already been opened and covered with German swastika censor stamps before they reached their beloved family in The Netherlands. When reading between the lines, the letters expressed a continuing concern about whether they were in good and safe circumstances. In the meantime, the Hofkers were trying to make the best of things in Ubud and kept life as busy as possible. Long afternoon walks and visits to fellow countrymen in the nearby area, like the artist Rudolf Bonnet, the sculptor Louis van der Noordaa at ‘Puri Saren’ and the retired lawyer Alphons Bonnike in Goa Gajah, were part of the daily routine. And on several occasions Willem and Maria dined with the Cocorda Agung and attended music concerts in Sajan given by the talented Czech/Hungarian pianist Lily Kraus, who greatly admired Hofker’s work.
Throughout the whole year, acquaintances and artist friends like Frieda Holleman came to stay with the Hofkers for a few weeks. These social events kept Hofker working closer to home and in nearby settings like in the Pura Gunung Lebah, a temple also known as Pura Campuhan. Possibly this temple was where this present drawing, portraying Ni Rinit in July of 1941, was originated. The girl was often found at the Hofker residence baking bread. Maria Hofker mentioned her to be sloppy and leaving all sorts of things out of place, a trait considered amusing by the artist.
In this particular drawing, Hofker pictured Ni Rinit looking back directly at the viewer, revealing the innocence of the young girl. In a classical pose, called Contrapposto, with her hand resting on the base of a Pelinggih, the seat for the ancestors, Hofker made an imaginary bridge between young and old. He draped her body in a triple colorful sarong which characterized his work of that time. Ni Rinit (also spelled Ni Rindit by Hofker) is often represented in his drawings, even in the most difficult years on Celebes where he was interned by the Japanese during the war. Precious memories of her innocent smile and characteristic features show great refinement even on the smallest pieces of paper.
Seline Hofker, May 2017
More information about our Indonesian auctions (Indische veilingen):
René de Visser
Zeeuws Veilinghuis
Herengracht 74
4331 PX  Middelburg
0031 (0)118-650680
www.zeeuwsveilinghuis.nl