By Zeeuws Veilinghuis 26 mei 2015 No Comments 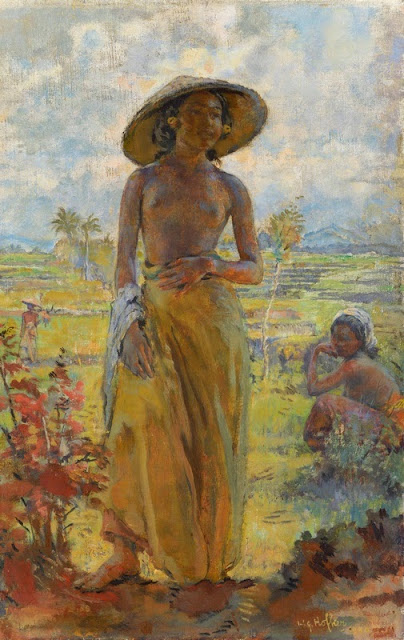 From November 1939 Willem Hofker stayed in Ubud Bali for a month and a half, to escape the heat of the city of Den Pasar. His house, which he rented from the Prince of Ubud (Tjokorda Gde Agung Sukawati), was located on a plateau overlooking the valley, intersected by ravines and sloping terraced rice fields as far as the eye could reach. Along the house ran a babbling brook, providing the terracedfields with fresh water, and which, in those days, was commonly used as a footpath. Through this path,women working in the fields would often pass Hofker’s residence. This created an excellent opportunity for Hofker to select his models.

‘We could not wish for a better place to live’, wrote Maria Hofker – Rueter, the artist’s wife,
in a letter from Ubud to The Netherlands in December 1939. And she continues:
‘It seems like we are in paradise, as I sit in the shade of the baleh, surrounded by complete silence, looking at this beautiful view. The overwhelming tropical sun is pouring over the valley, the alang-alang grass looks velvety green. And the people are wearing hats, as big as umbrellas, appearing as dark silhouettes against all that bright light. And then by the mountain range, perfectly pure, lies the Goenoeng Agoeg, surrounded by white, lilac and pink-blueish fluffy clouds, against a blue sky.’

At the border of his garden, Willem Hofker created this painting, portraying Ni Nyoman Rindit, while sitting in the shade of his baleh overlooking this magnificent view.

Ni Rindit lived next door to the Hofkers in Champuan and daily walked the footpath to the fields, when, one day, she caught Willem Hofker’s eye. From that day onward, she became a frequent model of him. She can be admired in his drawings and in some of his major oil paintings, such as ‘Ni Rindit carrying Singha’ (dated June 1940) from the Sukarno collection. Soon Ni Rindit became a beloved member of the Hofker household when the artist couple moved to Ubud in March 1940. This was abruptly terminated in December 1943 due to the Second World War. After returning to The Netherlands, Hofker continued to use her features in an etching titled ‘Preparing for Mekiss’.

After the war, Ni Nyoman Rindit and her family moved to the village Panestanan. She got married and became a caring mother of two daughters and a son. She continued posing as a model, but now for the Spanish artist Antonio Blanco (1912-1999), who married Rindit’s aunt Ni Ketut Ronij. Ni Rindit grew to become a proud and gracious lady who lived with her youngest daughter in Tabanan until she passed away on January 3th of 2012.

When Hofker immortalized Ni Rindit by capturing her in this painting, ‘Ni Rindit in the sawah’, in January of 1940, she was a strikingly tall and pretty girl with a lighter skin. He depicted her elegant posture using various shades of brown, orange and even a blue-ish grey, which gave her appearance shade and a glow of tropical warmth. Dressed in a simple sarong, which she slightly lifts with one hand, she steps into the garden as she is returning from the rice fields. She seems to transform into a dark muse followed by a golden light. Hofker painted a second girl, sitting down in an everlasting serenity, to complete an everyday scene of a beautiful morning in Ubud, which is so typical of his
Balinese work.

‘I enjoy all that is beautiful about this country and its population, as they are totally one with nature’. Willem Hofker wrote in a letter to his parents 1939.

Provenance: Family of the artist.