By Zeeuws Veilinghuis 18 mei 2017 No Comments 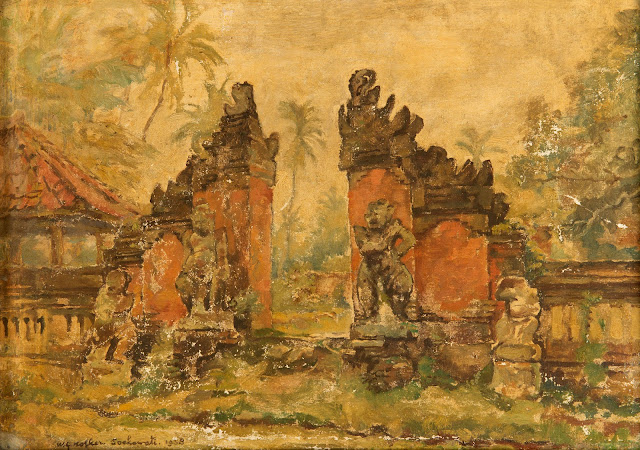 Provenance: a present by the artist to the Dutch fleet pastor in 1952, and thence by descent in the same family.

When Willem Gerard Hofker (1902-1981) arrived in Bali in June 1938 he had made numerous drawings and sketches on his preceding journey through Java. But once he resided in Denpasar he found the tranquillity and the rural setting for his work in painting. The area provided the artist with an abundance of architectural monuments and graceful models who were willing to pose for him. At dawn, Hofker, wearing his panama hat, often rode his bicycle to explore the area, the field easel on the carrier so he could capture the view of palace or temple entrances in oil paint as often as the weather permitted it. In the ‘Hofker’s Letters and Diary of 1938’ many references are made to his finished artwork, depicting these gateways in paint.

The Regency of Gianyar was an oasis of possibilities as Hofker described the surroundings as full of ‘’Stilled models’, that have all the time in the world ‘. Bali was more he could ever have hoped for. Quoting him again ‘…and on a grey or rainy day I can have the choice of a beautiful, joyful male or female model to work with in the studio’. Why is it that so little of these ‘Stilled Models’ are known today? Certainly not due to a lack of research but most likely due to losses caused by the devastating actions during World War II.

What we do know today is that the presented painting titled: ‘Soekawati 1938’ is a unique gem. It is, as far as we know, the first painting made by the artist on Bali. It reveals the then somewhat insecure hand of the master. After nine months without using paint, Hofker applied the oil to the canvas in a very modest way, expressing his view on the split gate, the Candi Bentar in Sukawati. The painting survived the journey back to the Netherlands. It stayed in the artist’s possession until 1952 when he decided to give it away as a token of gratitude to a friend, a former fleet pastor of the Dutch Naval Aviation Service who served in Netherlands East Indies. Maybe Hofker purposely left the condition of the painting as it was, like a testimony of the circumstances during times of ordeal.

The Candi Bentar is situated only 20 km from where Hofker was living at the time, and is in fact a double guarded entrance gate to a Kori Agung, a second gate with a closed door in the middle that is made of red brick. It is slightly visible behind the tree branches on the right of the painting. With a few red brushstrokes, Hofker marked that spot between the green of the sketchy trees. The whole complex is located on the current Jalan Raya Sukawati and is part of the Puri Ageng, the residence of the royal family of Sukawati.

More information about this painting
or about our Indonesian auctions (Indische veilingen) in general: