By Zeeuws Veilinghuis 31 oktober 2014 No Comments
‘Life leads to decay and aging
in Man and what Man built;
Only beauty is truly enduring.’
(Rudolf Bonnet, handwritten in one of his books)
(de Roever-Bonnet, p. 72) 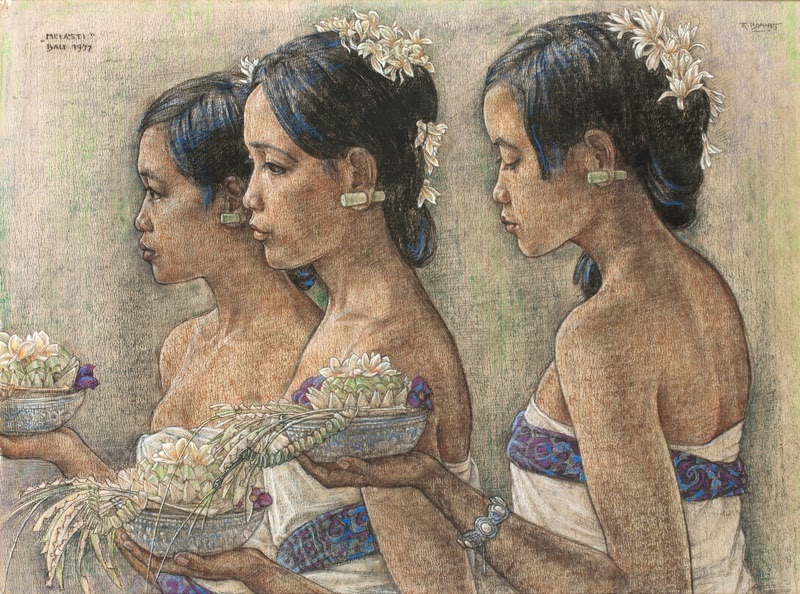 To Rudolf Bonnet, beauty was the source of inspiration. He was especially fascinated by the beauty of the human face, which could either be the characteristic expression in a wrinkly Anticolian face, or the virginal appearance of three Balinese girls.

“Throughout his entire life, he drew them, the faces of men and women, and his style barely changed. They all have something in common, yet they all differ, because all portrayed remain themselves.” (de Roever-Bonnet, p. 82)

Made only a year before he passed away, Bonnet was still able, 82 years old, to portray the elegance and contemplative mood of the Balinese. Looking at the similar faces, dress, subang earplugs and adornments, one could wonder whether Bonnet has drawn the same girl three times, or whether they are sisters. Either way, there are typical draughtsman’s skills in this work of art that make it a typical Bonnet: the size, for one, betrays Bonnet’s background as a mural painter, in the footsteps of artists like Michelangelo whom he so much admired; the texture of large crayon colour surfaces, typically quite rough in Bonnet’s 1970’s work, the striking use of blue to emphasize the Balinese glossy raven hair, and the many frangipani flowers that are rendered in such a realistic manner. But, most importantly, Bonnet’s mastery of en profile portraits, that still look three-dimensional, and his way of visualizing anatomy, is unsurpassed.

The girls’ faces have a somewhat resigned, yet dignified expression, while they carry their lightweight offerings. The title refers to a ritual called Melasti, which is meant to purify sacred objects belonging to temples, and also to acquire sacred water from the sea. The Melasti ritual is performed a few days before Nyepi, a ‘Day of Silence’, heralding Balinese New Year, which is mostly celebrated in March.
Bonnet was a great admirer of , the Balinese people and their rituals. The beauty of these rituals is what fascinated him. Much like the beauty of a ritual and the beauty of the Balinese that he portrayed throughout his life, Bonnet through his art proved that beauty is truly enduring.