By Zeeuws Veilinghuis 31 mei 2016 No Comments 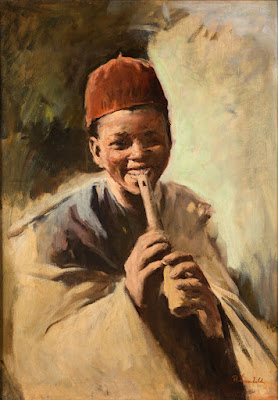 “Here there is no sadness and sorrows that are shown, but their opposite, the beauty and happiness of the world. Here are no complicated voices from a mysterious psyche… but here is represented pure pleasure of the senses.”
(De Javabode, 5 May 1939, cited from Erminia Locatelli-Rogers, Romualdo Locatelli, “Memoirs 1938-1946”, The Ultimate Voyage of An Italian Artist in the Far East, Darga Fine Arts Editions, Jakarta, 1994, p. 166)

‘Romualdo Locatelli is one of the most fascinating figures in the artistic context of the early decades of the 20th century. He led an itinerant life that took him to distant countries in the near and far East. Spurred on by a fierce inner restlessness, he abandoned his homeland at a young age to search for new impressions that led him to follow the ways of the “exotic romanticism”, preceded by a few other artists from Bergamo, like Luigi Brignoli, Giorgio Oprandi and his friend Ernesto Quarti Marchiò with whom he undertook the African adventure.

During the first decades of the 20th century, until the onset of the Second World War, the East still exerted a strong attraction on the artistic European culture. Romualdo Locatelli can be called an “orientalist”. In 1925, he participated in the Triennale Exhibition of the Accademia Carrara with a work entitled Il Dolore (Pain), for which he received the silver medal of the Ministry of Education.
In 1927, Locatelli travelled to the African continent in the company of the painter Ernesto Quarti Marchiò. The two young men, beyond the fascination aroused by a land untouched compared to civilized and industrialized Europe, were certainly encouraged by the “glimmers of Africa”, the Equatorial light that permeates and dissolves any form giving an impression of limitlessness, to deepen their vibrant luministic research. This research led the artist Locatelli well beyond the borders of the ‘East’ (which generally meant North Africa and the Middle East), causing him, in 1938, to travel to a world mostly unknown to the Europeans, namely the Dutch East Indies.

Unrelated to the reality of his time, unconcerned of artistic and political upheavals that characterize the first half of the 20th century so strongly, he continued his journey in solitude. When the Second World War had moved from the Western front to the East, Romualdo Locatelli disappeared on February 24, 1943. His body was never found and his death is a mystery still unsolved.’

The present lot probably represents some of the most primal instincts of mankind – the desire to live, and to express oneself freely. Locatelli used the themes of young innocence, which the boy clearly expresses, and the joy of making music, which makes this painting a feast for the eyes. His vigorous and light-hearted brush strokes emphasize these themes.