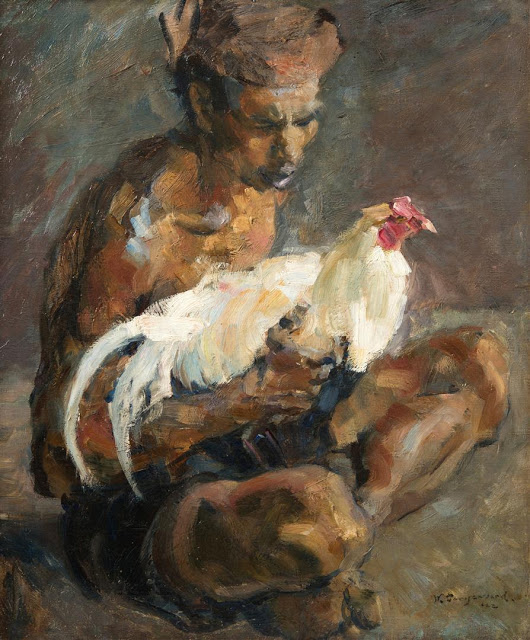 ‘… an unspoilt part of the earth, where man, nurtured by the sun’s warmth and supported by their Gods, lives happily, diligently, and cheerfully, in the lush natural environment, which they enrich with countless beautiful expressions of their powerful art and their religious touch. How beautiful are their bare, shiny and therefore colour-reflecting bodies in the golden glory of the morning light, how agile and rhythmic do they move along mountain paths and below the gigantic, sacred waringin trees. Just look at them go, the young, robust men and the slender, young women in their vivid robes. (…) …the crowded markets are feasts for any painter; there, indigenous people are wandering between cattle and poultry, between the enormous still lifes of colourful fruits and vegetables, of crockery and fish.’ (Willem Dooijewaard, describing Bali in a letter to Th. B. van Lelieveld)
There is a number of well-known Dutch artists who travelled to the Dutch East Indies in the early 1920s; Willem Witsen (1921), Isaac Israels (1921-1922), Willy Sluiter (1923), H.P. Berlage (1923), and Marius Bauer (1925), among others. Most of them, however, were just ‘passing by’; they resided in the Dutch colony (mostly Java) for a few months or a year at most. In this respect, Willem Dooijewaard was quite different. One could argue whether Dooijewaard -like his soul brother Roland Strasser (1886-1974)- was a painter who travelled or a traveller who painted. Be as it may, it is beyond any doubt that Dooijewaard had a great passion for indigenous Asian cultures. For more than 20 years, between 1912 and 1933, he travelled through Asia.
Born in 1892 in Amsterdam, he studied at the Royal Academy of Art in Amsterdam. He spent six years at a rubber plantation in Sumatra, from 1913 until 1918, after which he set out for Bali in 1919. The following year he returned to Holland, to go back to Bali just a few months later. Dooijewaard resided in Bali in 1920, 1921-22 and 1931-33. Stylistically, these three periods differ quite a bit; his 1920 work comprises small pencil sketches with a documentary feel to them, similar to the sketches produced in Java and Sumatra throughout 1918-1919 (ref. lot 33 of this sale). The lithographs he made upon his return to Holland transcend these academic sketches, although they are still made in
a traditional way.
The second part of his Balinese oeuvre is much more convincing: under the influence of Strasser, in 1921-1922 his sketches became more bold, his oils more determined, clearly choosing an almost divisionist style. He would use this painting technique in the years ahead, travelling through China, Mongolia, Tibet, India, and Japan.
Roland Strasser, however, was not the only artist responsible for Dooijewaard’s shift to this divisionist style of painting. Another Austrian artist and art professor, Carl Fahringer (1874-1952), played a vital role too. Strasser and Fahringer must have known each other before they even embarked on their travels to Southeast Asia: both being Austrian, they studied -and Fahringer also taught- at the Vienna and Munich Academy, and both were war painters during World War I. Fact is that Strasser, Dooijewaard and Fahringer met, and probably even worked together in 1922. A nifty charcoal portrait from 1922 by Dooijewaard of ‘Prof. Fahringer, from Austria’ while sketching proves their acquaintance.
By and large, it is safe to assume that Fahringer influenced not only Emil Rizek (1901-1988), but also Strasser, and in turn Dooijewaard, to develop their early 1920s post-impressionist style. Although Fahringer himself would stick to this style until the 1930s, Strasser and Dooijewaard would clearly change direction in the years that followed, probably feeling more comfortable with the impressionist style of painting they are commonly known for.
The current lot, however, is a rare example, marking the start of this early 1920s work which was influenced by Strasser and Fahringer. Vigorous rectangular strokes shaping the human figure, and a rich variety of shades constituting the glossy skin tone, compose a cock fighter, seated in lotus, and holding his fighting cockerel. It embodies the well-known traditional sport, in which gambling plays such an essential role. ‘Gambling (…) was generally considered to be the main attraction of cockfighting. For the Dutch and Indonesian governments this was one of the main reasons to outlaw the popular traditional sport. Another reason for banning cockfighting was a change in attitude with respect to cruelty to animals.’ (1)
On the other hand, and contrary to what most people think, cock fights are not always a matter of life and death. On Bali, a water clock (penalikan) was often used when a fighting cockerel was temporarily ‘knocked out’. A coconut shell -with a hole in it- is placed in a vessel with water. When the cockerel does not get up before the complete sinking of the shell (which moment is announced by striking a small gong) he is considered beaten. (2) Moreover, these cockerels were highly esteemed, well-fed and pampered by their owners. The current impression by Dooijewaard of a fighting cockerel and its owner is in fact one of deep connection between man and animal. With this painting, Willem Dooijewaard touched upon one of the ancient Balinese customs, catching a single preparatory moment of quiet intimacy.
(1) Donk, P. van, Indonesian Cockspur Cases, Kotak Taji, Bali Lombok Sulawesi Kalimantan, Hes & de Graaf Publishers
B.V., ‘t Goy-Houten, The Netherlands, 2000, p. 16.
(2) Goris, dr. R., Dronkers, Drs. P.L., Bali, Atlas Kebudajaan, Cults and Customs,
published by the Government of the Republic of Indonesia, circa 1952, p. 185.
Gianni Orsini MSc., November 2019
More information about our auctions of Indonesian paintings:René de VisserZeeuws Veilinghuis – Zeeland Auctioneersrene@zeeuwsveilinghuis.nl
www.zeeuwsveilinghuis.nl