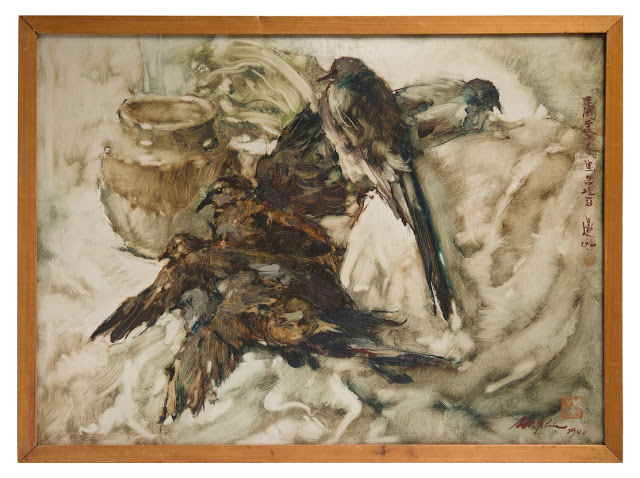 ‘one in a thousand’!
Man Fong made this painting the year before he visited Bali. It has unique characteristics and
can be considered as a ‘bridge’ between his European style (such as lot 104) and his Eastern style
(such as lot 58).
At the start of his career, Lee painted the European, impressionistic way. Characteristic for this
style was the ‘impasto’: the paint was applied in thick layers, which provides texture once dry.
The painting depicted here has impressionistic features for certain, but the impasto is lacking;
the paint shows almost no relief, as is true for his other Eastern paintings. The way in which the
background is painted is also rather unusual for Man Fong.
Lee Man Fong is well-known for his dove paintings. He made quite a lot of them. Over the
course of the last twenty years, more than a hundred of his paintings with doves have been sold by
auction. All those paintings depict white (or peace-) doves, however, this particular piece shows
another species, presumably red collared doves or little cuckoo-doves: unique in his oeuvre.
The painting is dated both in Chinese, winter ’29 (Chinese Era), and in the Western dating
system, 1940. We analysed all known auction results (about a thousand paintings) and books on
Lee Man Fong and discovered only a few paintings dated ‘1940’. Most of these pieces show the
aforementioned characteristics and display a Western signature as well as Chinese characters. We
found just two paintings in Eastern style dated earlier. (1) These pieces have no precise date, but
are indicated as 1930’s.
It is true, auction houses (and auction databases) have dated several of his Eastern works more
specific in one of the 1930 years. We are pretty sure, though, that this is incorrect, in particular
those dated before 1937. Man Fong started to experiment with the Eastern style in 1937 only,
and it was not before 1949 that he definitely changed his course. (2) The reason for this incorrect
interpretation will be the (already mentioned) fact that Man Fong used both the Western and the
Eastern dating system. For example, lot 58 in this auction, is dated ’37, while it has been made in
1948 (which can be founded by the fact that is has been exhibited in 1949).
All in all, we may conclude that this is a very rare painting in the oeuvre of Man Fong!
(1) Siont Teja, ‘Lee Man Fong – Oil Paintings Volume II’,
Art Retreat, Singapore, 2005, pp. 212 and 213
(2) Idem, p. 13
More information about our auctions of Indonesian paintings:René de VisserZeeuws Veilinghuis – Zeeland Auctioneersrene@zeeuwsveilinghuis.nlwww.zeeuwsveilinghuis.nl