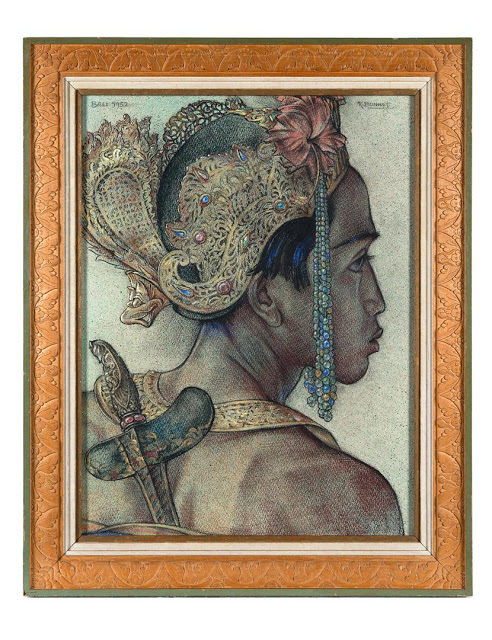 Formally educated at the Amsterdam Royal Academy of Fine Arts, Rudolf Bonnet visited Java, Bali, and Nias in 1929-1930, and found his second home in Bali in 1931, after being enchanted by Balinese dance performances. Bonnet developed a deep connection with Balinese culture and art forms. In 1936, he founded Pita Maha, together with I Gusti Nyoman Lempad, Walter Spies and Cokorde Gde Agung Sukawati, preserving and developing a high artistic level of the Balinese arts and crafts. He initiated and designed the Puri Lukisan museum in Ubud, and was highly respected by President Sukarno.
In the current lot, dated 1952, Bonnet demonstrates his genius as a mature draftsman. He suggests the anatomy of the dancer in his meticulous use of crayon, showing the grain of the paper to his advantage to suggest skin texture, and making the background more vivid by applying the spattering technique (in this case grey and turquoise blue), that he and Willem Hofker had developed over the years. Moreover, the dancer is depicted in a ‘signature Bonnet pose’; a completely three-dimensional suggestion of the young man is conveyed by (initially) drawing his facial features in strict side view. However, the Balinese youth looks over his shoulders, which is emphasized by the wrinkles in his neck, so the spectator gets the impression of a full-fledged three-dimensional representation. Considering this young man must have posed for hours, he was probably not in this position from the very start of the sitting.
The young dancer is portrayed wearing a traditional dagger (keris), typically in the Balinese way; high and asymmetrically on the back. The keris has a wooden scabbard which is decorated with polychrome painted floral motifs. It has a sheath crosspiece (wrangka), derived from a kidney or mango seed shape (batun poh), and boasts a figurative handle, with a ruby-adorned handle ring (selut).
Although many ‘experts’ have claimed this special type of handle to represent a mythological horse or eagle (Garuda), W.O.J. Nieuwenkamp (1874-1950) proved –already in 1905!- that we are dealing with a stylized six-legged longhorn beetle (Batocera Hector). In Balinese, it is referred to as Kocet Kocetan, derived from the penetrating sound it makes (1). It is said that this insect represents one of the Primordial Animals, Batara Karpa, a beetle whose mother was Dewi Winata, a bird-demon, who was married to Rishi Kasyapa, a tortoise. Three other animal gods were born from this marriage: Batara Garuda, the eagle, Batara Agniya, the marten, and Batara Kowara, the snake. Batara Karpa, or
Kusia, is closely linked to one of the three main gods (Trimurti), Brahma, which in turn implicates that keris with a kocet kocetan handle are only allowed to be worn by Brahmans. Similar to a caterpillar changing into a butterfly, the kocet kocetan is also said to symbolize a youth on the verge of becoming an adult or undergoing an evolution in profession or status (2).
Although Bonnet often depicted a detail of a Balinese keris behind the sitter’s shoulders, in the current lot he has consciously drawn the full dagger. Bonnet was known for his artistic interpretation of human proportions, elongating faces and anatomy. Whether or not done on purpose, this keris, although in realistic proportions, has been drawn too small; either because Bonnet wanted to portray it as a whole, or because he did not want the keris to distract too much attention from the young man’s face and headwear.
The role the sitter is enacting is from one of the Balinese dances Gambuh, Arja or Daag (from the Janger). Bonnet has meticulously drawn the beautiful ornaments on the dancer’s head, shoulders and neck; these are all made from buffalo hide, in a similar way that wayang kulit puppets are made. The leather is perforated in geometric patterns, gilt and decorated with (a suggestion of ) semi-precious stones. The headgear, adorned with red hibiscus (kembang sepatu), contains two rows of reflective droplets on the forehead. With a subtly cast shadow, Bonnet shows that the badong (the triangular necklace ornament) floats just above the shoulders. In the dancer’s neck, one can clearly see the side view of Garuda Mungkur, the mythical bird Garuda, its head pointing backwards to protect the dancer from evil spirits.
Although the identity of the sitter is not absolutely clear, there are similarities with I Jemul, who helped Bonnet around the house and garden while Bonnet was living in Ubud from the late 1940s until 1958. The theme of a Gambuh or Arja dancer has been portrayed by Bonnet several times, with Balinese artists like Ida Bagus Made Diatasura, wearing the same headwear and same keris on his back (3). A comparable dancer was depicted, standing, in the seminal 1954 work Aankleden voor de Voorstelling (Dressing Up for the Performance), now part of the Sukarno Collection (ibid.).
In this majestic drawing, Rudolf Bonnet reveals to us once more the graceful character of the Balinese people, their natural elegance, and their mesmerizing culture.
(1) Nieuwenkamp, W.O.J., Schetsen van Bali en Lombok, Eigen Haard, 1905,
in: Nieuwenkamp, W.O.J.N., Beeldhouwkunst van Bali, The Hague, 1928, pp. 12-14.
(2) Neka, Pande Wayan Suteja, Understanding Balinese Keris: An Insider’s Perspective, pp. 36-37.
(3) Roever-Bonnet, dr. H. de, Rudolf Bonnet, een Zondagskind, 1993, pp. 105-106.
Gianni Orsini MSc., November 2019
More information about our auctions of Indonesian paintings:
René de Visser
Zeeuws Veilinghuis – Zeeland Auctioneers
rene@zeeuwsveilinghuis.nl
www.zeeuwsveilinghuis.nl