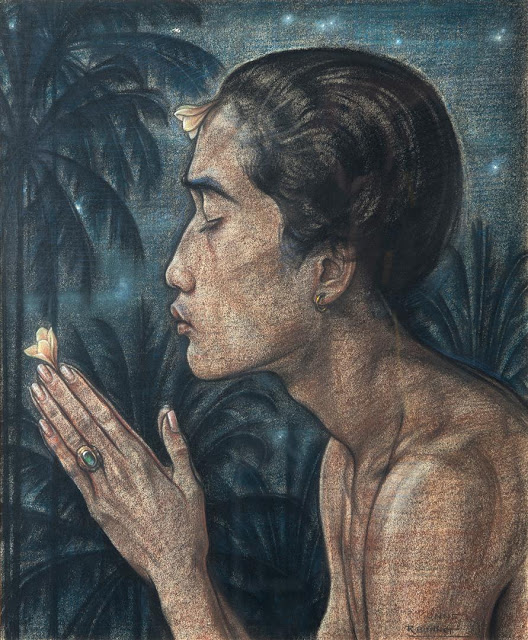 RUDOLF BONNET (1895-1978)‘Balinese Man during Mebakti’, signed l.r., mixed media on paper. 54 x 45 cm.Executed ca. 1942-1943.
Provenance:Gifted by Rudolf Bonnet to the mother of the current owner.According to her, this piece was made in an internment camp during World War II.
Exhibited:
Probably exhibited at the Masonic Lodge, Makassar, January 11-16, during a joint exhibition of Bonnet with Schudel-Petraschke, Los, and W.G. Hofker, as no. 4: Nachtelijke Meditatie (Nocturnal Meditation), priced at Dfl. 250,-.
From 1911 until 1917, Johan Rudolf Bonnet was formally educated at the AmsterdamRoyal Academy of Fine Arts and three other schools in Amsterdam and Haarlem, givinghim a broad knowledge and an academic background. He lived and worked in the Italianvillage of Anticoli Corrado during the 1920s. Bonnet also traveled through northernAfrica before embarking on a journey to the Dutch East Indies. He visited Java, Bali,and Nias in 1929-1930, and finally found his second home in Bali in 1931, after beingmesmerized by Balinese dance performances. Bonnet developed an intense connectionwith Balinese culture and art forms. He founded Pita Maha in 1936, together withI Gusti Nyoman Lempad, Walter Spies and Cokorde Gde Agung Sukawati, preserving,developing, and maintaining a high artistic level of the Balinese arts and crafts.He initiated and designed the Ubud museum Puri Lukisan, and was highly respected byPresident Sukarno.
It is suggested this drawing was made by Bonnet in one of the Japanese internmentcamps, in the period December, 1943 until August, 1945. This seems hard to believe,as his monography states that Bonnet hardly produced any drawings at all in any ofthe three camps, apart from a few sketchy little portraits. It is more realistic to supposethat Bonnet made the current drawing in the vacuum of the Japanese occupation ofBali, between February, 1942 and December, 1943. Rudolf Bonnet and his good friendWim Hofker were imprisoned twice at Denpasar jail, but released when a Japaneseofficer found out both men were artists. After that, both could live and work in ‘relativefreedom’ for about year and a half, although they were regularly told to produce drawingsfor Japanese officers. Thus, from both artists a number of drawings are known that beara Japanese date, 2602 or 2603, being Japanese synonyms of 1942 and 1943. In Bonnet’smonography, a drawing depicting Mebakti bears the date 2603*. The praying young manis possibly the same person as the portrayed man in the current lot.There is an even more comparable drawing, but lacking the detailed background, whichwas sold in these rooms almost 10 years ago. It was dated 1941, and was bearing the title:Priesterzoon – a Balinese priest’s son.Mebakti is a Balinese term that encompasses the act of praying, showing respect and reverence,alone or together. Elevating one’s hands, with a frangipani flower clamped betweenthe index fingers and middle fingers, mebakti is a moment of reflection and meditation aswell. The current drawing, with its stylized nightly background, adds a great deal to theatmosphere of solitude and intimate quietude.
Balinese Man during Mebakti can be best compared to the style of Jan Toorop (1858-1928). The dramatic visualisation, using thick outlines, stylized form, using religiousconnotations, and drawing in side view, all these elements echo Toorop’s iconic oeuvre.In the early 1920s, Toorop produced numerous portraits in side view, some of themdepicting his subjects while praying. It is no coincidence that Bonnet was a great admirerof Toorop’s work. When young Rudolf Bonnet exhibited his Anticoli Corrado oeuvrein The Hague, at the Kunstzaal Kleykamp, in 1923, he was honoured to see Jan Tooropand the famous architect H.P. Berlage (1856-1934) visiting the exhibition. Berlage hadtraveled to the Dutch East Indies a year before, and Toorop (being of Javanese descenthimself ) would draw the portrait of W.O.J. Nieuwenkamp (1874-1950) only 4 monthsafter the exhibition. Knowing that Nieuwenkamp would meet Bonnet in Italy a few yearslater and would be the one inspiring Bonnet to travel to Bali, it is obvious there is a chainof ‘Indies connections’ and (mutual?) inspiration that has made Bonnet’s prolific life sofascinating.
*Roever-Bonnet, dr. H. de, Rudolf Bonnet, een Zondagskind, Pictures Publishers, Wijk enAalburg, The Netherlands, 1993, compare with the drawing on p. 86, plate 35.
ir. Gianni OrsiniOctober 2018
More information about our auctions of Indonesian paintings
(veilingen van Indonesische schilderijen):
René de Visser
Zeeuws Veilinghuis
rene@zeeuwsveilinghuis.nl
www.zeeuwsveilinghuis.nl