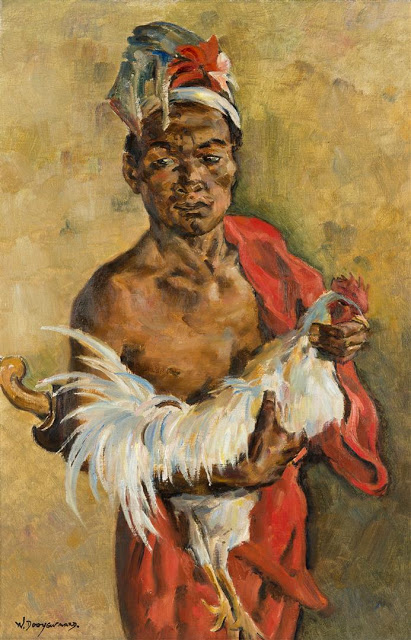 WILLEM DOOIJEWAARD (1892-1980)‘The cockerel fighter’,signed l.l., canvas.85 x 55 cm.Executed ca. 1932.€ 50.000 – 70.000Literature reference:Dhaimeler, D.H., W. Dooijewaard, a Dutch artist in Indonesia,Jakarta 1992, compare with an almost identical painting, p. 155.Koenraads, J.P.: De Gebroeders Jacob en Willem Dooijewaard, Hilversum, 1966, compare with an almost identical painting, p. 89.
‘Dooyewaard did not imagine of this fairytale island any Far Eastern dreams or phantasticdepictions. He considered reality to be sufficient, and generously visualized this reality, invigorously, broadly painted colour gamuts.’(Theodoor van Lelyveld, Willem Dooyewaard op Bali,in Nederlandsch Indië Oud en Nieuw, November 1936)
Over a period of 20 years, between 1912 and 1932, Dooyewaard traveled through Asia.After finishing his studies at the Royal Acadamy of Art in Amsterdam in 1912, he spent6 years at a rubber plantation in Sumatra, before he left for Bali. It was in Bali where hemet and befriended Roland Strasser, in 1922.The two artists worked together and traveled together, defying hardships of all kinds, andobserving things that were hardly ever observed before by Europeans. Dooyewaard andStrasser managed not only to visit, but also immortalize on paper and canvas the peopleof China, Mongolia, Japan, India, and Tibet, to name but a few. Bali, however, takes aspecial place in Dooyewaards body of work.
Dooyewaards Balinese oeuvre can be divided into three periods: his stays in 1918-1920,1921-22 and 1931-1933. Stylistically, these three periods differ quite a bit; In the secondperiod, Dooyewaard was greatly influenced by Roland Strasser. In 1931, shortly aftermarrying Jacoba Reinders in Japan, he enjoys a third stay on Bali, initially intended tobe Willem and Jacoba’s honeymoon. During this period, his work developed into theimpressionist style that Dooyewaard is best known for.
‘Many of Willem’s Balinese paintings were done during the three happy years they wereto spend there. They avoided close contacts with the white population in the island andlived alone amidst luxuriant nature, fully accepted by the kind Balinese people. Theyunderstood them and loved their culture and customs, the highly mystical religiousdances, the fascinating intense surrender of the dancers to their emotions and the beautyof the strictly traditional movements and figures, full of symbolism.’(Koenraads, 1966, p. 167)
Consequently, Dooyewaards paintings from 1931-1933 depict legong dancers (mostlyportrayed full length onto one-meter high canvases), market vendors, landscapes, andcock fighters. The current lot is a typical example of a man holding his cockerel, from thisperiod. It represents all the energy, pride and virility of this ancient blood sport.
Fighting cockerels were usually pampered by their owners like prize-winning horses.A majority of Balinese men spent a substantial amount of time with their favoritecockerels, grooming them, feeding them, discussing them, trying them out againsteach other, or just gazing at them with a mixture of rapt admiration and dreamy selfabsorption.Judging from his intense look, the cockerel fighter we see here, seems asfearless as his prized animal. Dooyewaard is able to capture the impressive sense ofdistinction, with which the cockerel is presented to the world. There seems no doubt thatthis man’s beloved creature will emerge victorious from the next battle.The keris on his back makes us wonder where he is from: in the few suggestive brushstrokes, Dooyewaard seems to depict an elaborately carved ivory keris hilt fromMadura. The red hibiscus (kembang sepatu) in his headdress, however, suggests we aredealing with a Balinese man. Be as it may, his expression of power and determination isunchallengeable.
Painting in his matured manner, using spontaneous brush strokes and saturated,earthy colours, and above all, sensing and capturing the raw expression of indigenousdignity, Willem Dooyewaard portrayed his perception of a ‘fairytale island’, and anancient, proud culture.
ir. Gianni Orsini October 2018
More information about our auctions of Indonesian paintings
(veilingen van Indonesische schilderijen):
René de Visser
Zeeuws Veilinghuis
rene@zeeuwsveilinghuis.nl
www.zeeuwsveilinghuis.nl