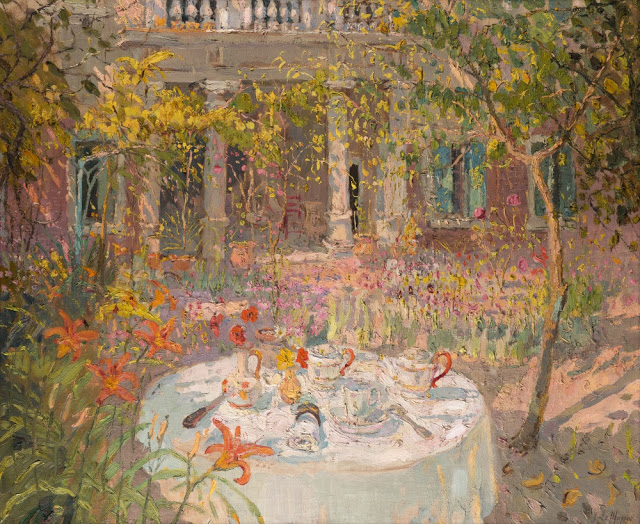 ADRIEN-JEAN LE MAYEUR DE MERPRÈS (1880-1958)‘View on Palazzo Frollo garden, Venice’signed l.r., canvas.100 x 120 cm.Annotated verso: ‘no 1. a encadrer à la place du no. 18 (Vahinées)‘.Provenance: private collection Belgium.
Immediately after World War I, where he had served in the so called ‘Régiment des Soldats Artistes’ for three years, Adrien-Jean Le Mayeur de Merprès (1880 – 1958) left Belgium in search of more cheerful themes, bright colours and sunlight.
It is known that he spend time in Venice in 1919, 1921 and later in 1927, 1928, 1929 and 1931. Though initially his colours are still atmospheric in subdued shades, before long bright lights and garish city colours began to influence his works: purple waters, bright blue skies and yellow or orange sails. And of course the sparkling sunlight and reflections on the waters in the city, causing the brightness and light in his paintings.
Le Mayeur was inspired by architectural forms as the San Marco Cathedral, domes of other churches, gondola’s, sails, boats and mooring-masts. Among his favourite themes were cheerful events, the Venetian fiesta’s like the Regatta, and activity on the quays and wharfs in the different quarters of the city. Many sketches and drawings are made on the Zattere quay on the Giudecca island, opposite the San Marco square. It was at Zattere – Giudecca in Pensione Frollo where Le Mayeur stayed when he visited Venice. Originally it was a sixteenthcentury convent designed by the greatest Renaissance architect, Andrea Palladio. In the early part of the 20th century, the pension was frequented by a clientele of painters, writers, and actors like Gabriele D’Annunzio. Since 2011 the building has been transformed into a luxury hotel; Bauers Palladio Hotel & Spa.
In the secluded lush garden of Palazzo Frollo, Le Mayeur found inspiration as well. The breakfast table with attributes like a teapot, a vase with flower and a water jug has been his theme in numerous charcoal sketches, drawings and several large canvasses executed from different angles, sometimes entitled Palazzo Frollo. In some works a pond or gate is visible, in others a glimpse of the pension. On some sketches he wrote ‘matin’ or ‘soir’in order to experiment with the different illuminations of the day. In the painting which is to be sold at the Zeeuws Veilinghuis, we see a view from the garden towards the back of the building. The breakfast table with the white table cloth, surrounded by orange lilies-of-the-day and a small elegant tree, introduces the spectator to the entrance at the back of the house, which is flanked by four columns supporting a balcony. Two terracotta pots stand before this entrance. Green shutters contrast beautifully with the pink plastered walls of the pension. A flowerbed with irises and roses is visible between the table and the house. The colours Le Mayeur uses in this painting foreshadow his favourite palette during the two future decades in Bali. Pinks, oranges, reds against greens and purples blend into an artistic and elegant whole. Spots of light on the columns, ground, branches and leaves along with the long purple shadows suggest a delicate early morning light. The paint was roughly applied in impasto with short, thick brush strokes. Probably the artist used a palette knife too. The critics wrote about the works of Le Mayeur: “… he works with much paint, which is mixed with so little oil that it is as if he has to pay for its weight in gold. This still proves necessary for the rendition of the light.” Another reviewer: “I believe that Le Mayeur’s force is in the direct, well-aimed rendering of the tonal values and the quick smearing and squeezing out of the right colour.”
On the reverse of the canvas is written, in the handwriting of the artist: ‘no 1. a encadrer à la place du no. 18 (Vahinées)’, which means: ‘no. 1 to frame instead of no 18, Vahines.’ Clearly, this sentence is an indication to the frame-maker. During his travels around the world, Le Mayeur used to send his canvasses to his business representatives and agents employed in the firm of Felix Mommen in Brussels. They framed the paintings and offered them for sale or sent them to exhibitions all over Europe. The paintings of women (Vahines) Le Mayeur made in Tahiti were shipped to this firm as well. Le Mayeur probably visited Tahiti in 1929 for several months. It is most likely that ‘no. 18’ refers to the painting of Two women on the beach in Tahiti (illustrated on p. 77/116 in the reference book Le Mayeur Painter – Traveller, 1995), for ‘no. 18’ is written on the back of that painting and both paintings have the same size. According to a few reviews, several large-sized canvasses executed in Tahiti were shown in an exhibition at the Palais des Beaux-Arts in Brussels in 1931. Considering the fact that the painting of the garden in Venice was framed around the same time as the Vahines no. 18, and that another ‘Garden in Venice’ was shown in an exhibition in 1931 in Galerie de la Toison d’Or in Brussels, and also from a stylistic point of view, we can presume that it has been painted between 1929 and 1931.
In this canvas Le Mayeur shows his mature stylistic and artistic skills: the rendering of the light, the use of colours, and the ability to render a very intimate atmosphere. They already predict the genius in which the artist will create the Bali works less than a decade later. That’s why, in my opinion, this Venice work is a beautiful and fine example from his European and pre-Bali period.
Drs. Cathinka Huizing, October 2018
More information about our auctions of Indonesian paintings
(veilingen van Indonesische schilderijen):
René de Visser
Zeeuws Veilinghuis
rene@zeeuwsveilinghuis.nl
www.zeeuwsveilinghuis.nl