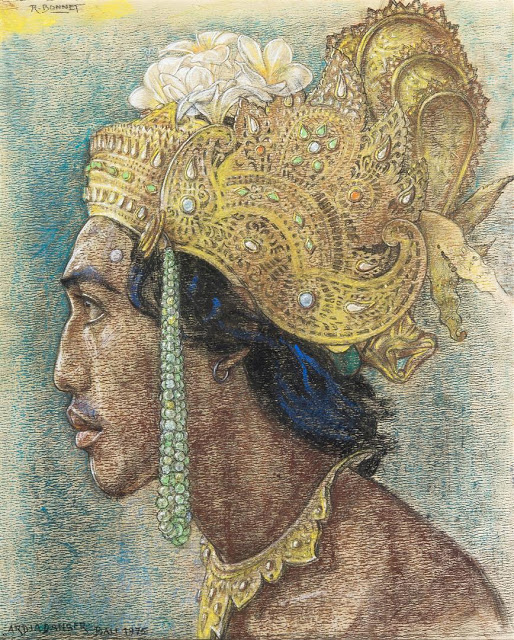 “Throughout his entire life, he drew them, the faces of men and women,
and his style barely changed. They all have something in common, yet they all differ,
because all portrayed remain themselves.”
(de Roever-Bonnet, p. 82)
Made only three years before he passed away, Bonnet was still able, 80 years old, to portray the elegance and contemplative mood of this Balinese Arja dancer. There are typical draughtsman’s skills in this work that make it a ‘true Bonnet’: the texture of large crayon colour surfaces, typically quite rough in Bonnet’s 1970’s work, the striking use of blue to emphasize the Balinese glossy raven hair, and the many frangipani flowers that are rendered in such a realistic manner. But, most importantly, Bonnet’s mastery of this en profile portrait, that still looks three-dimensional, and his way of visualizing materials, textures, and anatomy, is unsurpassed.
Johan Rudolf Bonnet was born in Amsterdam in 1895, into a baker’s family, as the fifth of seven children. From 1911 until 1917, he was formally educated at the Amsterdam Royal Academy of Fine Arts and three schools in Amsterdam and Haarlem, giving him a broad knowledge and educational background. He lived and worked in the Italian village of Anticoli Corrado during the 1920s. Bonnet also travelled through Northern Africa before embarking on a journey to the Dutch East Indies. He visited Java, Bali, and Nias in 1929-1930, and finally found his second home in Bali in 1931, after being mesmerized by Balinese dance performances. Bonnet developed an intense connection with Balinese culture and art forms. He founded Pita Maha in 1936, together with I Gusti Nyoman Lempad, Walter Spies and Cokorde Gde Agung Sukawati, preserving, developing, and maintaining a high artistic level of the Balinese arts and crafts. He initiated and designed the Puri Lukisan (Museum) in Ubud, and was highly respected by President Sukarno.
The dancer in the current lot enacts a character from the Arja, an ancient Balinese play that corresponds most to the Western idea of opera, or rather of musical comedy. The young man Rudolf Bonnet portrayed, must be one of the main characters of this Balinese dance-drama. We are able to fully enjoy Bonnet’s talent to meticulously draw the beautiful ornaments on the dancer’s head, shoulders and neck. These are all made from buffalo hide, in a similar way that wayang kulit puppets are made. The leather is perforated in geometric patterns, gilded and decorated with small pieces of mirrored glass to give a suggestion of (semi-)precious stones. The headgear is adorned with fresh frangipani flowers. A subtly cast shadow shows that the badong (the triangular necklace ornament) is rigid, floating just above the dancer’s bare shoulders. In the dancer’s neck, one can just see Garuda Mungkur, the mythical bird Garuda, its head pointing backwards to protect the dancer from evil spirits.
Rudolf Bonnet visualized Balinese actors and dancers many times throughout his life. From the early 1930s until his death in 1978, Bonnet drew and painted Arja, Keris, Gambuh, Joged and Legong dancers. This late drawing still expresses Bonnet’s passion for the renowned Balinese dances, which in 1931 were an important reason for him to permanently move to the Island of the Gods.
Gianni Orsini MSc. May 2019
More information about our auctions of Indonesian paintings
(veilingen van Indonesische schilderijen):
René de Visser
Zeeuws Veilinghuis
rene@zeeuwsveilinghuis.nl
www.zeeuwsveilinghuis.nl