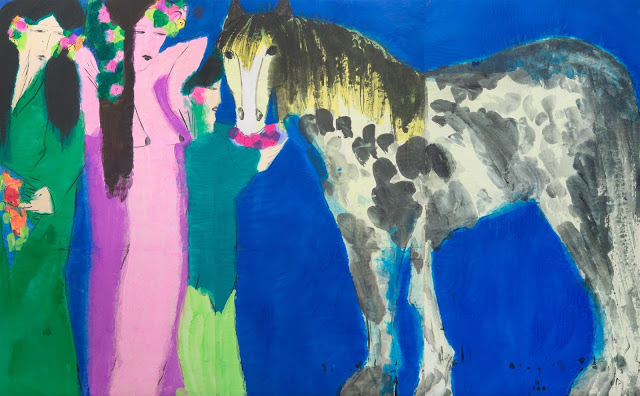 Walasse Ting was born in China in 1929. He was a versatile artist: a painter, a sculptor and a poet. At a young age, he learned to draw with chalk on the streets. Later on he always considered himself as self-taught, even though he was trained at the Shanghai Academy of Art (but only for a relatively short period). In 1952 he went to Paris.The first years weren’t easy, but he got acquainted with artists of the avant garde group called COBRA. One of them was the Dutchman Karel Appel, with whom he later shared a studio in Amsterdam.
In 1958 Walasse Ting left for New York. He befriended Sam Francis and became strongly influenced by abstract expressionists. Together with Francis he created a book containing his poetry: 1 Cent Life. The book, published in 1964, was illustrated by artists like Karel Appel, Jim Dine, Andy Warhol and Francis. In the 1970s he developed his well-known style, of which the current lot is a clear example.
With calligraphic brushstrokes het drew the outlines and then filled the areas with bright acrylic paint.
Walasse was awarded the Guggenheim Fellowship Award for Drawing in 1970.
His works are present (among others) in the collections of:
– The Metropolitan Museum of Art, New York
– Museum of Modern Art, New York
– Guggenheim Museum, New York
– Museum of Fine Arts, Boston
– Chicago Institute of Art
– Tate Gallery, London
– Musée Cernuschi, Paris (Ting donated eighty paintings to this museum)
– Shanghai Art Museum
– Taipei Fine Arts Museum
– Hong Kong Museum of Art
Since 2001, Ting had been living in Amsterdam, the Netherlands.
He died in 2010 at the age of 80, soon after moving back to New York city.
Auction: 5th of June 2019
More information about our auctions of Asian paintings:
rene@zeeuwsveilinghuis.nl
www.zeeuwsveilinghuis.nl