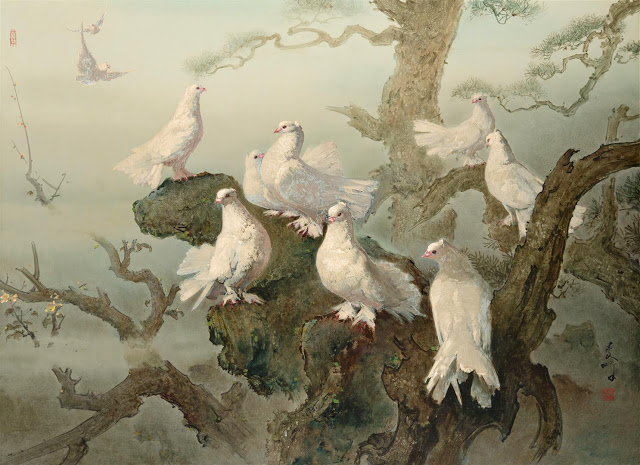 Born as one of 10 children in the Chinese town of Guangzhou, raised in Singapore and going through his formative years in Jakarta when it was under Dutch, Japanese, and ultimately Indonesian rule, and living in the Netherlands in the years following World War II, Lee Man Fong was inspired by many cultures and teachings. At a young age, the family moved to Singapore, where Man Fong would eventually make ads and artwork to earn a living. In 1932, he moved to Jakarta, where he was inspired by work of the artists at the ‘Nederlandsch-Indische Kunstkringen’ and the counter movement Persagi. In 1942, he was incarcerated because of his opposition to Japanese colonialism in Indonesia.
In the early stages of his artistic career, Lee Man Fong was introduced to Western painting in the Netherlands, and was inspired to mix Eastern and Western art forms, creating a unique artistic body of work. In 1941, he lived in Bali for three months, where he made a series of oil paintings in a Western impressionistic style, applying grey, brown and green hues, creating a non-romanticized view of his subjects. Between 1946 and 1952, through a scholarship he received after being recommended by the Dutch Governor-General van Mook, the artist resided in the Netherlands. During these six years, Man Fong held four solo exhibitions in Amsterdam and The Hague. After returning to Indonesia in 1952, Lee Man Fong lived in Jakarta, and was so respected as an artist that art-savvy President Sukarno asked him to become his personal art advisor and editor of a 5-volume edition of Sukarno’s vast art collection, in 1964. In the introduction of these books, Man Fong summarized his vision on art as follows:
‘Painting is the flower of culture forming an expression without words, but with strokes that can communicate with anyone everywhere, without the limits of time, nationality and language.’
(Lee Man Fong, in: Lukisan Lukisan dan Patung Patung Kolleksi Presiden Sukarno dari Republik Indonesia, part I, Foreword, p. 18)
In the course of his life, he went back to his Chinese roots, switching from the European impressonist way of painting into a more calligraphic way of handling his brushes, painting onto long-stretched boards, typically circa 100 x 50 cm, portraying all kinds of animals at ease, wandering around in a more or less ‘perfect world’. Lee Man Fong was fond of animals. He was known to keep roosters, chicken, doves and parrots, as well as dogs and a huge pond of goldfish in his garden, and he would frequently paint these animals from life.
It is not coincidental that Man Fong frequently painted doves, seated on the branches of an old tree. Being of Chinese-Indonesian descent, and having lived in Singapore for many years, he like no other realized that symbolism is highly valued in South-East Asian culture. Doves are associated with long life and fidelity, considering doves pair for life, and take great care of their young. The little blossoms that grow from the tree could symbolise this long life.
At closer inspection, we see eight doves at rest, while two more are flying toward the tree. It is even possible that this painting represents LMF himself, with his 9 siblings. The eight doves at rest refer to ‘lucky number’ 8. This number stands for wholeness or completeness, as ‘Bafang’ (The Eight Directions) represent the whole universe in traditional Taoist culture. But also in modern times, 8 is a lucky number. It is pronounced in Chinese as ‘ba’, which sounds similar to ‘fa’, meaning ‘well-off’, or ‘getting rich in a short time’. The number 8 is thus associated with wealth.
The signature style of LMF, echoing Western and Eastern influences, is clearly present in the current
painting; the doves are painted in a rich, impasto way, which is clearly impressionist; However, the branches with its thin-inked outlines, the graphic tree bark and moss textures, and the foggy surroundings creating an atmospheric perspective, are clearly referring to the classic Chinese way of calligraphic painting. All these signature elements, combined with the impressive dimensions, allow the conclusion this painting is a most important and representative work by Lee Man Fong.
Gianni Orsini MSc. May 2019
More information about our auctions of Indonesian paintings(veilingen van Indonesische schilderijen):
René de Visser
Zeeuws Veilinghuis
rene@zeeuwsveilinghuis.nlwww.zeeuwsveilinghuis.nl