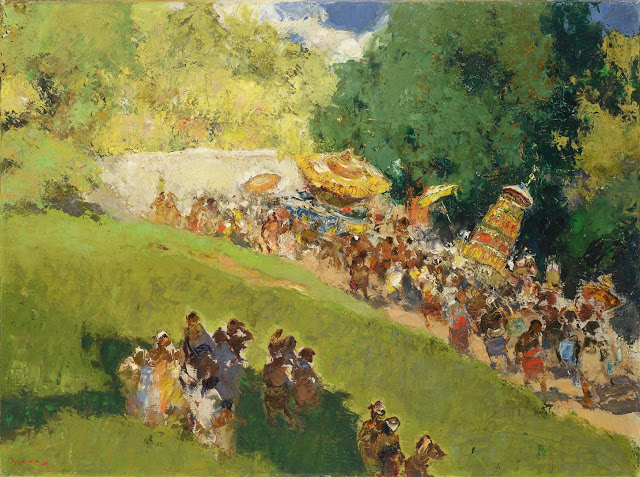 “Adolfs has fathomed the soul of the Javanese and Balinese people. He has vitalised and intensified his figures with no loss of tranquility. Perhaps that is the most striking characteristic of these canvasses: this silent activity, of posture rather than of motion, and of concentrated observation on an event rather than active participation in it.”
(Hengeloosch Dagblad, 15 October 1949)

Gerard Pieter Adolfs was born on January 2, 1898 in Semarang, Central Java. He studied architecture in Amsterdam. After graduating, he was drawn back to Java, and decided to dedicate the rest of his life to painting. Being a successful artist, it allowed Adolfs to travel for a few months, each year. The main subjects of his work were scenes of Java, Bali, Japan and of North Africa: portraits, market sceneries, cock-fights, ceremonies, landscapes and townscapes. In 1940 – shortly before the occupation of Holland – Adolfs came back to Europe and settled in Amsterdam. He exhibited in many well-known European galleries after the war. On 1 February 1968, Adolfs died in the Dutch city of 's-Hertogenbosch.
The obvious bright colours that Adolfs uses in this 1951 painting actually go back to his Vibrant (Impressionist) period, which started around 1936. It is assumed to stem from several journeys, amongst others to Japan. There, he was introduced to lavishly bright colours in the local flora and fauna, and in the traditional Japanese clothing. From that moment on, it became a part of his painting style.
Gianni Orsini MSc., October 2020