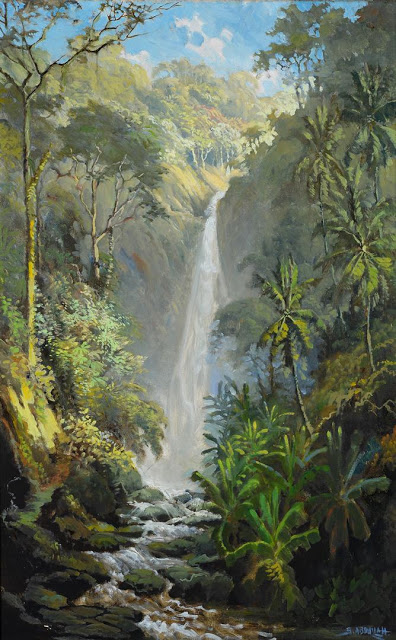 Basoeki Abdullah was an Indonesian artist born in 1915 in the city of Surakarta (also known as Solo) on Java. He was the son of Soerjosoebroto Abdullah, a well-established Balinese painter who was famous for his romantic naturalistic style. Abdullah was trained at the Royal Academy of Art in The Hague during the thirties. Back then he was the only artist from Indonesia to receive an formal education in the Netherlands. It was only after the Indonesian independence in the forties that many of his countrymen would follow.[1] After Abdullahs years in the Netherlands the painter travelled to Paris and Rome and his work got exhibited in various countries like Malaysia, Japan, England and Portugal. Abdullah received most of his fame as an artist due to the fact that he made several portraits for heads of states and celebrities, including Queen Juliana of the Netherlands, her consort Prince Bernard of the Netherlands, President Marcos of the Philippines, the Sultan of Brunei and President Sukarno of Indonesia, but he also painted, rural flora and fauna, the Indonesian landscape and court scenes.[2] Abdullahs life came to an tragic end in 1993 when the painter was murdered in his house in Jakarta by three burglars. He was 78 years old.
This painting is one of the many landscapes Basoeki Abdullah made during his lifetime. The work shows the beauty of the Indonesian nature in a realistic, but also in a romantic way. It has been said that Abdullah put his so called ‘eastern perspective’ to a use while producing these pictures and that this resulted in an ambiance that is both ‘pure’ and ‘cordial’.[3]The landscape can also be categorized as an artwork that belongs to the ‘Mooi Indie-style’. This is a style of painting developed during the first half of the twentieth century and features mostly components like sun, mountains, palm trees, paddy fields and kampungs.
[1] Beyond the dutch, p. 85. [2] Bénézit 1999 , vol. 1, p. 23. [3] A. van Roon, Op den Uitkijk (tijdschrift), 1947.
Jacquelina van den Acker, August 2019
More information about our auctions of Indonesian paintings:
René de Visser
Zeeuws Veilinghuis
rene@zeeuwsveilinghuis.nl
www.zeeuwsveilinghuis.nl