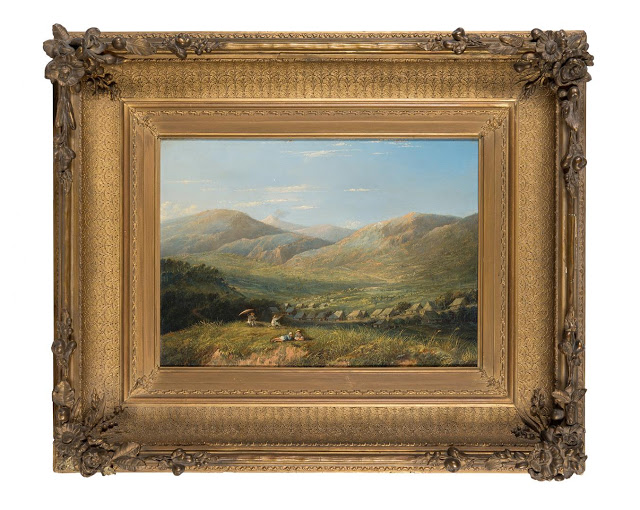 Abraham Salm, also known as Abram or Ab, was born in 1801 in Amsterdam, where he spent the first three decades of his life. During this time Salm worked as a merchant, but he was also a collector of art and a painter. He created several landscapes pictures which depicted scenes like cattle grazing and people hunting. For these paintings Salm must have received a certain degree of positive recognition, given the fact the he became a member of the Royal Academy of Art in Amsterdam in 1833 and his work was allowed to be presented at the exhibitions of the artist’s society ‘Levende Meesters’. This society was a Dutch group of contemporary painters and can in a way be compared to the French Salon of that time.[1]In 1837 Salm left the Netherlands and moved to the Dutch East Indies where he spent a big part of his life on Java working as a tobacco planter. It was here that the painter got fascinated by the beauty of the tropical landscape, which resulted in the production of many pictures in which he captivated the nature of Indonesia in a realistic but sometimes also dramatic way.
This painting shows the mountains of Tengger on East Java, with a little village in the foreground as well as a man on the left who is drawing under a parasol. Between 1865 and 1872 the engraver Johan Conrad Greive produced a series of 24 lithographs that were depicted after paintings and drawings of Salm, such as this painting. The series was published by the art dealership Frans Buffa & Zn. in Amsterdam and extremely popular in the Netherlands at the time. It is suggested that the series can be considered to be representative of the highest point in the depiction of Indonesian topography by chromolithographic printing. The lithograph made after this particular painting is included in the collection of the Rijksmuseum in Amsterdam.

It is argued that the man portraited at left might be Abraham Salm himself, perhaps he wanted to show the moment in which he was making the first sketch of what would later become this painting.
Jacquelina van den Acker, August 2019
[1] Scheen, p. 282
More information about our auctions of Indonesian paintings:
René de Visser
Zeeuws Veilinghuis
rene@zeeuwsveilinghuis.nl
www.zeeuwsveilinghuis.nl