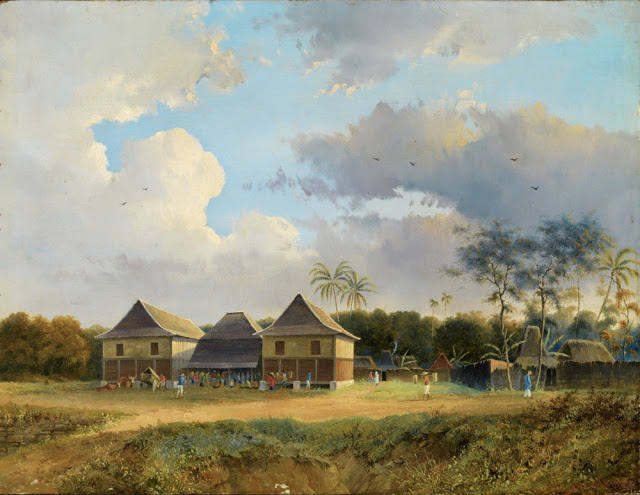 Jacob Dirk van Herwerden was born in Zutphen in Netherlands at the beginning of the nineteenth century. In 1823 he travelled to Indonesia where he joined the civil service and worked as Controller of Ngrawa, a village on the East side of Java. In 1944 he got promoted to the assistant-representative of the Dutch government in the city of Probolinggo and in 1944 he received the post of head-representative in Madiun. Over the course of his stay Van Herwerden made several sketches of the Indonesian landscape, but it was only after his return to the Netherlands in 1848 that he developed these into small oil paintings. Between 1853 and 1872 there were several exhibitions organised in The Hague where Van Herwerdens work got presented to the public. According to information given by the Netherlands Institute for Art History Van Herwerden kept on painting till his death in 1879.

This painting shows a warehouse for coffee in the Madiun Regency on the island of Java, where Van Herwerden worked as the head of the local government. In the foreground you can see people working and carrying around baskets that are presumably filled with coffee beans or other crops. In the background Van Herwerden gives us a glimpse of the tropical area that surrounds Madiun and he also presents a Kampung (village) to the viewer.
19th century paintings with Indonesian subjects are relatively rare these days. We are glad
to present this painting in our next Indonesian sale of the 6th of December, together with other 19thcentury paintings by artists like Raden Saleh and Abraham Salm.
Source of Information: Scheen, Pieter, Lexicon Nederlandse Beeldende Kunstenaars 1750-1950, ’s-Gravenhage (Kunsthandel Pieter A. Scheen N.V.) 1970, p. 469.
Jacquelina van den Acker, August 2019
More information about our auctions of Indonesian paintings:
René de VisserZeeuws Veilinghuisrene@zeeuwsveilinghuis.nlwww.zeeuwsveilinghuis.nl