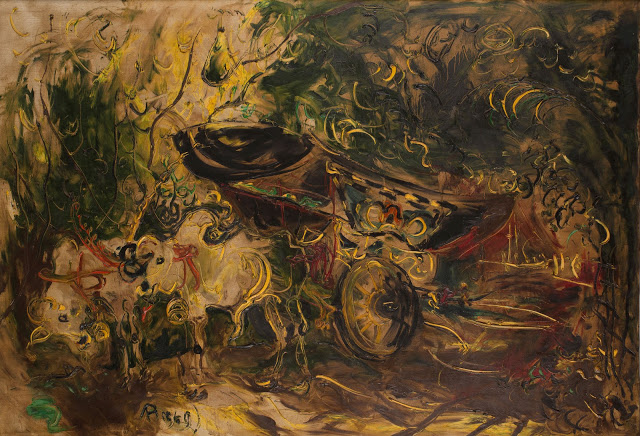 Provenance:
Inherited from Madam Lie-Han (Surabaya),
sister of the late mother in law of the current owner (Dutch).
Same family as the paintings by Lee Man Fong, lot 78 and 79.
Madam Lie-Han bought the painting probably directly from the artist.

Affandi is the grand old master of Indonesian art. As a self-taught artist,
he acquired world fame.

Affandi depicted life around him, always working on the spot. He painted in an
expressionist way. His method of working was characteristic. First of all he
meditated about his subject, taking all the time he needs. He never learned
to use a palette and instead developed his own typical ‘hands-on’ style. He
squeezed the oil paint directly out of the tube and smeared it with powerful
movements of his right thumb on the canvas, all in a very short span of time.
Occasionally, Affandi finished the painting by using a paintbrush to fill in the
empty spaces between the (mostly dark) thumb strokes.

This painting of a two-wheeled ox cart (gerobak), pulled by two oxen, clearly
shows that it has been painted with a lot of energy and speed, and certainly
with a lot of pleasure. Affandi always worked non-stop and probably finished
this painting in less than ninety furious minutes.

Gerobaks were mainly used in the countryside for heavy transports. They were
the heavy duty trucks from the past. The cart on the painting still has wooden
wheels. The sound of the little bells around the necks of the oxen and the
high-tuned squeaky sounds of the axles kept the tigers at a distance. After the
cargo had been unloaded, the gerobak returned home. Often children tried to
get a free lift from school to their homes. People liked gerobaks because they
were safe and strong. Nowadays one rarely sees gerobaks, only a few are left in
rural areas.

Affandi must have had affinity with these powerful as well as friendly giants.
He bought one and placed it next to his house at the Museum Affandi in
Yogyakarta. Presently this gerobak is being used as a musholla, a place to pray
for muslims. Affandi’s daughter Kartika, an internationally known painter, also
bought a gerobak. She put it in the lush tropical garden of her house, situated
in the surroundings of the Merapi volcano near Yogyakarta.

Barney Agerbeek is currently preparing the biography of Kartika Affandi, which
will be launched by LM Publishers in Asia, Europe and the United States early
next year.