By Zeeuws Veilinghuis 29 mei 2017 No Comments 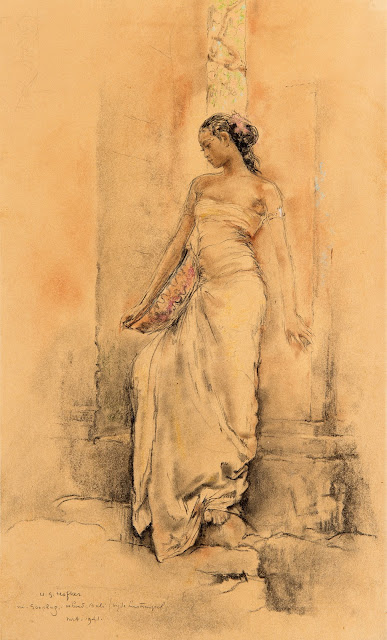 During the summer of 1920, Willem Gerard Hofker (1902-1981), accompanied by fellow students of fine art, traveled to Paris. Along with his friends and classmates Mari Andriessen (1897-1979) and Frits van Hall (1899-1945), both sculptors, he developed a great admiration for the classical sculptures. The friends visited the newly opened ‘Hotel Biron’, currently known as the Musée Rodin, several times. Willem wrote about these visits in detail in letters to his parents. The works of ‘the master of sculptors’, August Rodin, and the enormous collection of ancient sculptures and artefacts from Greece, Rome and Egypt in particular ‘made an ever-lasting impression’. He wrote ‘…, so much The Louvre can be jealous of! ‘.

After Paris, the party traveled on to Chartres where Hofker stayed for 10 days to study the main Cathedral. In more enthusiastic letters he made interesting remarks about the differences in sculptures. ‘In the Cathedral of Reims’, which he had visited before, he continued, (…) ‘the sculptures are placed in niches to separate them from the architecture’. ‘ (..) by itself they are nicer than here in Chartres, where they are purely narrative (..) the size of the figures, and their setting express the significance of it’. ‘But in Chartres they form an integral part of the architecture, with their beautiful modest forms but powerful expressions, everything is good and there are no disturbing elements present’.

If we translate Hofker’s remarks from Paris 1920 to this presented drawing of the charming beauty “Ni Soeplug, at the house temple” from Bali 1941, we can see that Hofker made a combination of the two. He displays the girl on a raised level in front of the doorway, as a niche. She is wrapped in a light, single pleated dress that detaches her from the red wall against which she is leaning. Like a ‘Dvarapala statue’, the Balinese gatekeeper, she stands guard while humbly gazing down, awaiting a visitor who might pass. Hofker portrays her features in thin but striking lines beginning at her left hand, equal in colour and tone to the building. The details of the golden jewellery and the rosette on her temple are vague, but unmistakably visible. More prominent is the elegant hibiscus flower that is positioned against her raven black hair. The sarong which covers her body is without elaborate patterns or striking colours but formed in a few outlines with added smudge in a fade technique. Ni Soeplug is part of this divine environment, where nothing disturbs the serenity. 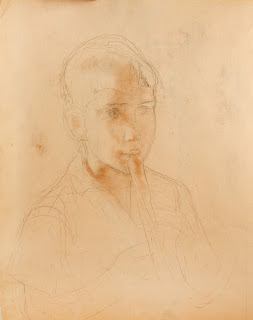 Verso: a preliminary study of a young boy playing the flute.

On the reverse side, we discovered a preliminary study that reveals the excellent drawing technique of Hofker. What can be seen in the sketched lines is the face of a young boy playing the flute. Although nothing is noted about his identity the image undoubtedly represents Diederik Walraven (1930-2015), cousin of the sculptor Frits van Hall. In 1938, Willem and Maria Hofker regularly stayed with the Walraven family in Bandung (East Indies). Later on, throughout the fifties in Amsterdam, Diederik visited the violin playing artist Hofker in his studio to play music together on a weekly basis. In that same period, his sister Carla had become one of Hofker’s main Dutch nudes. Diederik grew up to become a gifted flute player and composer of music on which the sounds of his native city Bandung had a prominent influence and gave it a distinct sonority.