By Zeeuws Veilinghuis 1 december 2016 No Comments 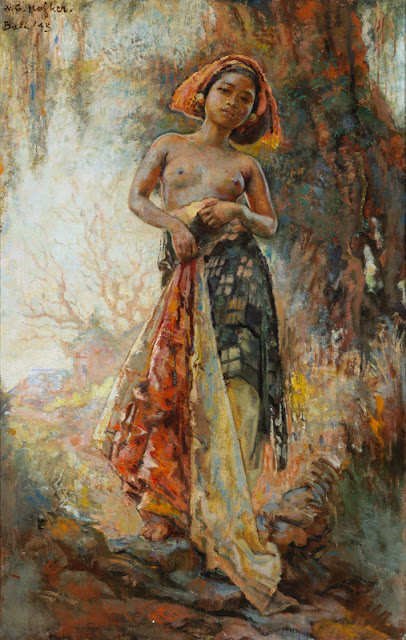 Willem Gerard Hofker (1902-1981) was born in The Netherlands in the city of The Hague. From a young age, Willem grew up as an artist and was undeniably influenced by some of his father’s close friends, such as the well known Dutch painters Isaac Israels (1865-1934) and Willem Witsen (1860-1923).

At the age of fourteen, Hofker had already created his first significant oil painting on panel. When this painting was shown to Israels, he stated that Hofker was unmistakably a gifted genius. Witsen provided the panel to the young boy. Upon seeing the finished work, Witsen pronounced that Hendrik Johannes Haverman (1857-1928), a widely respected artist of the era, would have been very happy if he could have produced a comparable palette of colours.

In 1936, when Willem Hofker had become a respected artist and a gifted portraitist himself, he was honored to accept a commission by the shipping company KPM for an official state portrait of Her Majesty the Queen Wilhelmina. Upon completion, he and his wife Maria were offered a free passage to the Dutch East Indies in 1938, to accompany this portrait to the KPM headquarters in Batavia (currently Jakarta).

Hofker traveled through Java and Bali where he initially wanted to stay for a year and a half to work and supply a number of commercial drawings for the KPM. Eventually, he settled in Bali with the intention to live there for his remaining lifetime. This, due to intervention of the Second World War, was reduced to merely eight years.

When this presented painting, titled ‘Ni Kenjoeng bij waringin’, was created in 1943, Bali was under Japanese occupation. Hofker had been detained twice for several weeks since Bali had been invaded. Both times, he was ‘released’ by intervention of a Japanese commander who thought one should not prevent an artist from creating. Hofker kept on working in the secluded area of his home in Ubud until his final deportation to an internment camp on Celebes in December of that same year, only a few months after finishing this magnificent painting.

Hofker, much like Isaac Israels , loved to work outdoors where he could directly capture the impressions of nature on canvas, enabling him to emphasize the display of daylight. In the case of this presented painting, he captured the morning sun rising over the Champuan ridge and the 8th century temple, Pura Gunung Lebah, of which a detail can be seen next to the Balinese beauty. She is called Ni Ketut Kenyung, “a noble girl” as Hofker defined her. She is pure and youthful but seems much aware of her graceful appearance. Perhaps that is the reason why Hofker portrayed her in this painting in particular. He placed her standing tall but looking slightly down to his position as he sits on the stairs, which are leading down to the Wos river. It makes her silhouette appear more conspicuous against the tropical sky. The enormous waringin tree, with its whimsical aerial roots, rise up high while its hanging branches enfold the temple which is exposed in the sunlight. In this way, one can see that Hofker created a connection between heaven and earth, spirit and nature, light and dark. The Balinese girl is at the center of that universe because she represents all of it. A balanced life on Bali as seen by Hofker.

In 1943, as Hofker reached the age of forty-one, he could still use a full palette of colours to create a masterpiece like this outstanding painting of Ni Kenyung (standing under the waringin tree). With smooth brushstrokes, he gave an impression of the stairs at the base. He used the same palette passionately to capture the holy waringin tree where it stands in front of a bright and blue sky. The tip of her sarong is draped on the ground and leaves only a suggestion of her small feet. But following that sarong up to her delicate hands, female forms and face wherein Hofker gives full detail, as if he wants to lift her beyond these impressions, he still proves to be a realist painter.This painting of sublime quality holds all the enchanting elements which Willem Gerard Hofker admired so much about Bali. 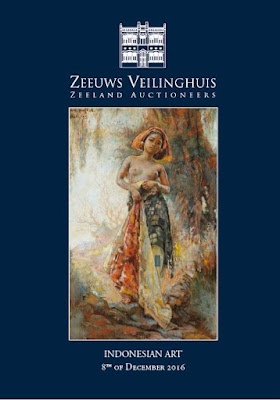 Click on the link below for the catalogue in pdf:
CATALOGUE INDONESIAN ART – DECEMBER 2016

Exhibited: at the art hall of the ‘Moderne Boekhandel’ in Amsterdam on October 22nd till November 15th of 1947.
The painting ‘Ni Kenjoeng bij waringin’ is prominently placed on that inside page of that exhibition announcement.

Provenance: acquired directly from the artist, at the ‘Moderne Boekhandel’ exhibition , in Amsterdam, 1947.
Thence by descent of above to the present owner.