By Zeeuws Veilinghuis 6 juni 2016 No Comments 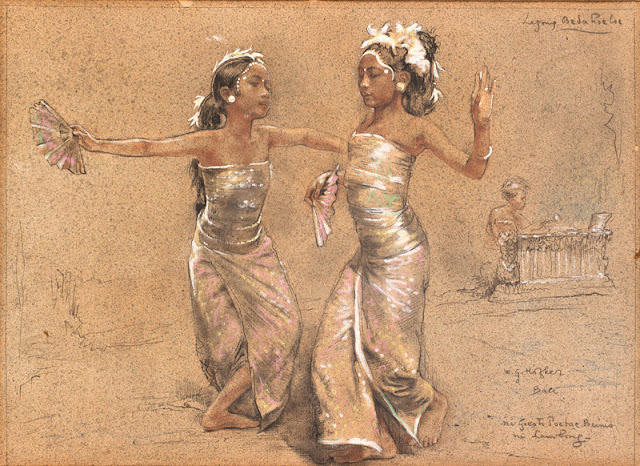 When Willem Gerard Hofker was invited to visit the Dutch East Indies in 1938, he had never travelled outside of Europe. For Willem and his wife Maria, there must have been a feeling of deja-vu though; in the early 1920s, before they were even acquainted, both of them had already heard mesmerizing stories from befriended artists who had visited Java and Bali, like Isaac Israels, Marius Bauer, Willem Dooijewaard, Jan Veth and Willems godfather Willem Witsen. As early as 1918, Maria had visited an exhibition of drawings and lithographs by W.O.J. Nieuwenkamp in Amsterdam.

Willem and Maria prepared well for the journey and the indiginous cultures of the overseas colony, picking up some Malay words and sentences, and reading books about Bali by Karl With and Gregor Krause, and Island of Bali by Miguel Covarrubias. There were good reasons to do so; Willem Hofker had been invited by the Batavia headquarters of the KPM (Koninklijke Paketvaart Maatschappij) not only to make, and personally deliver in Batavia a portrait of the Dutch Queen Wilhelmina, he was also asked to combine this presentation with a sojourn through Java and Bali, immortalizing the Javanese and Balinese people in a documentary way. These drawings were to be sent to Holland, so KPM could reproduce them for marketing purposes. Although Hofker hardly had the anthropologic skills or interest that W.O.J. Nieuwenkamp, Walter Spies, Rudolf Bonnet and Miguel Covarrubias did, he knew that in this case, he should describe and explain ceremonies, dances, and architecture in detail. He would do this specifically for his client, KPM, but it became routine, and later on, he continued doing so, as the current lot shows.

The south-Balinese village of Bedahulu, just east of Ubud towards Gianyar, is well-known not only as the birth place of one of the most iconic Balinese artists ever, I Gusti Nyoman Lempad (1862-1978); the famous Yeh Pulu Temple was also found in Bedahulu. Apart from that, the village has become renowned for its dance performances. One of Walter Spies’ many talents was photography, and in the late 1930s, he took striking pictures of Bedahulu Legong dances.

The Legong is arguably one of the most well-known Balinese dances. With more than fifteen different stories, best-known of which is the Legong Keraton, it features two prepubescent girls, introduced by a (male) condong. In the background, Hofker sketched a gamelan musician playing the gender; a simple yet effective way to set the scene, and to add depth to the drawing.

It has once been written: ‘Willem Hofker never painted dancers performing, but always at rest, as if they were reflecting for a moment before the actual dance.’ (Willem Hofker, Painter of Bali, 1993, p. 43). We now know that this is not quite the case; Hofker did immortalize a number of Balinese girls in the act of dancing, both in conte crayon and oil; the current lot is a fine example. It must be said, however, that these girls have not been drawn from life, but based on a photograph. The complex dancing pose and the facial expression of both girls are clearly (photographic) snapshots. The lack of any scribbly sketch lines only affirms this hypothesis. A similar work, based on a photograph, portraying Ni Cawan dancing the Legong Kebyar, was auctioned in these rooms two years ago. The most famous example of a Hofker drawing after a photograph can be found in the Sukarno Collection; a conte crayon drawing of a girl at prayer is based on a photograph from Island of Bali by Covarrubias…the book that Hofker was gifted in 1937.

The current drawing has not been dated. In this respect, it seems Hofker distinguished three types of drawings. Drawn from life, Hofker dated his work, more than often to the day; copied from an earlier drawing or painting (like lot 9 in this auction), Hofker documented the date of the original drawing ánd the reworked version; drawn from a photograph, typically dancing girls in action, Hofker purposely and conceivably did not date the work. However, there are some signs that help us determine when it was executed. A complex composition involving two girls dancing and a gamelan backdrop, the exuberant use of opaque white gouache, the coloured fixative, sprayed onto the paper… all these elements betray that Hofker made this drawing at a later stage during his stay in Bali, in 1942-1943, or even in one of the Japanese camps, 1944-1945. It could have even been made late 1945, early 1946 in Makassar, but this seems unlikely, considering Hofker would usually provide drawings from that period with English titles, attracting Australian officers to buy them.

Be as it may, one thing is certain: throughout his Indies oeuvre, and this conte drawing in particular,
Hofker yet again proves his ability to portray the finesse, pride, and elegance of the Balinese, and the richess of their ancient culture.