By Zeeuws Veilinghuis 31 oktober 2011 No Comments 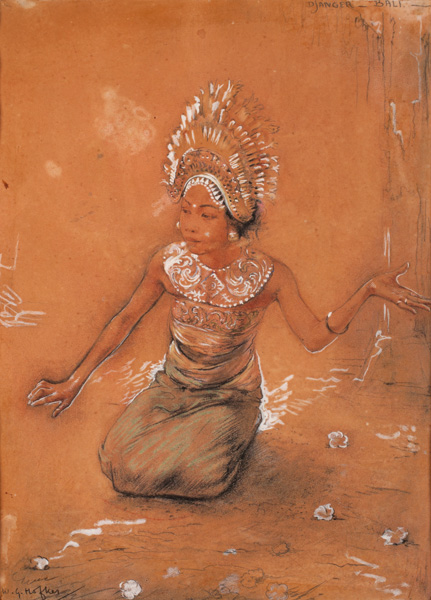 Willem Gerard Hofker (1902-1981), ‘Djanger dancer’, signed and ‘Djanger – Bali’,
conté crayon heightened with white on paper, 36,5 x 26,5 cm.
Early 1938, Willem Hofker and his wife arrived on Java, and after a few months travelled to Bali, where they fell in love with the culture, the people, and the art of the Island of the Gods. Hofker was fascinated by the rituals and dances of the Balinese, often performed by young girls. His models were more than often stunning beauties, both peasant girls and girls coming from highly ranked Balinese families.
At first, Hofker had his models pose in a classic, European, somewhat static way, and made the composition more lively by using accessories like wood carvings, musical instruments or baskets for daily offerings. Over time, this developed into more dynamic compositions, involving several people, and he eventually was able to capture the Balinese girls while they were dancing, or striking a dancing pose: in this way, the most typical poses of the Ardjé, Lègong, Mendèt, and Djangèr dance were frozen onto paper by Hofker.
Even in 1944 and 1945, when Hofker was separated from his wife and interned in Japanese camps, he continued to draw and paint and made some of his most beautiful work. Hofker, like no other, could visualize the anatomy of the girls’ arms, hands and fingers in such detail. And like no other, he could suggest the tropical light by using gouache paint, which emphasized the grace and elegance of his models.
Gianni Orsini
co-author -with Seline Hofker- of the upcoming publication about Willem Gerard Hofker
Provenance: Jan van Baal (1909-1992), former governor of the Netherlands New Guinea (1953-1958). During the Second World war he stayed in a Japanese internment camp. Rudolf Bonnet made a portrait of him there. After the war van Baal became director of the department Cultural and Physical Anthropology of the Royal Tropical Institute (Koninklijk Instituut voor de Tropen) in Amsterdam. He also was professor anthropology at the universities of Amsterdam and Utrecht.

More information about this painting and our auctions of Indonesian paintings: