By Zeeuws Veilinghuis 12 september 2016 No Comments 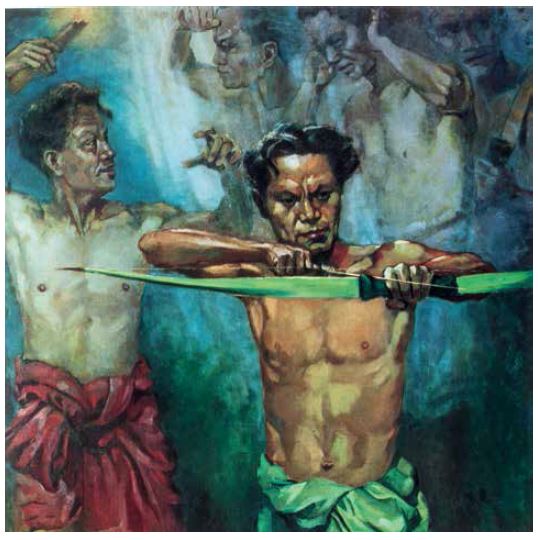 HENK NGANTUNG
Memanah
153 x 153 cm, 1943,
Oil on plywood,
Henk Ngantung’s painting Memanah coincidently was used as the background of the proclamation of the independence of Indonesia. Interestingly this painting was formally used as the background of the first press conference for the newly independent nation. Sukarno himself found this painting. He saw it for the first time at the exhibition held Keimin Bunka Sidhoso, Jakarta in 1944.
“This is a good painting. It is a symbol of the Indonesia that keep moving forward. Paulatim longius itur! “Said Sukarno. After the exhibition was over, Sukarno secretly came to Henk’s studio. “I want to buy the painting,” said Sukarno. “For Sukarno I can give the painting as a present, but I also need money,” said Henk. Henk said also that the painting was not finished yet. The arm part was not yet perfect. Henk said that there should be a model to finish. At that time he did not have any model.
“I will be the model,” Sukarno shouted.
Henk was stunned and unable to refuse. So, immediately he painted to finish it. Approximately within half an hour the process of repairing the arm was over. Soon after the painting was put in the car and Sukarno brought it to his house at Pegangsaan Timur 56, Jakarta. He made use of it as a very meaningful visual material. 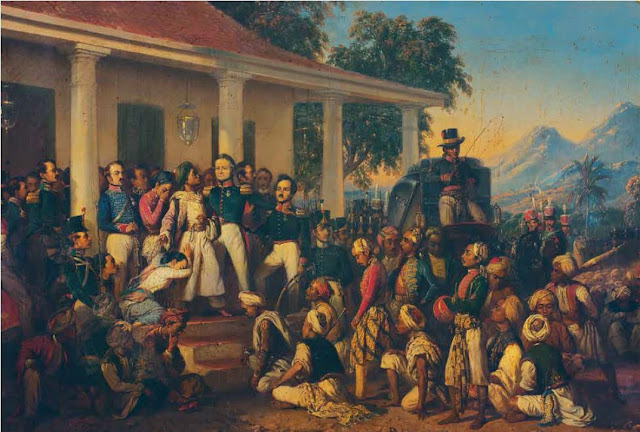 RADEN SALEH
Penangkapan Pangeran Diponegoro
112 x179 cm, 1857,
oil on canvas
He was a world-famous painter from Java. He was born in Semarang in 1811 and died in Bogor in 1880. He spent his life in Europe and Java. He is considered the pioneer of modern art in Indonesia. With stunning talent, he painted a variety of themes, including the history of Prince Diponegoro or Java war, which occurred in 1825-1830.
This painting was inspired by the painting titled The Submission of Prince Diponegoro to General De
Kock by a Dutch painter, Nicholaas Pienemaan. The actual event of the submission was on 28 March 1830. It finally ended the Java War. Unlike the Pienemaan’s, Raden Saleh’s painting suggests Javanese-style nationalism as well as describes the dramatization of the Prince’s life before the colonialists. It can be seen from the title and gesture of the prince.
Raden Saleh made this painting in the Netherlands and he gave it to the Queen of the Netherlands. This painting condemned the occupation of Java and demanded the Dutch to restore the dignity of Javanese people. Therefore, Raden Saleh also drew himself in the painting as a witness of the arrest that was actually a fraud. The Dutch government granted the painting to the Indonesian government in 1978, along with the return of a number of other artifacts of cultural heritage. Since then the painting has been an important part in the Presidential Palace of the Republic of Indonesia. 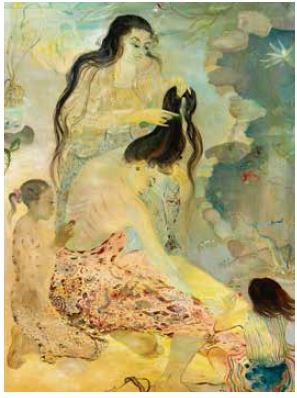 HENDRA GUNAWAN
Kerokan
200 x 144 cm, 1955,
oil on canvas
Yogyakarta in 1955, one morning President Sukarno wanted to visit a number of art studios. After landing at the Maguwo airport of Yogyakarta, he went straight to Umbulhardjo area, to be exact, to the studio of Pelukis Rakyat in Kampung Sentulredjo. In the visit he was accompanied by painter Affandi, Sudarso and the chairman Hendra Gunawan.
Sukarno was served with an exhibition of paintings. Although their showroom looked simple, their artistic passion as marked by the works being displayed were enough to give him the impression of their charm. Tens of works that were randomly and densely displayed eventually could be enjoyed in this bamboo-walled studio. On this occasion, Sukarno also took Hendra Gunawan’s painting titled Kerokan (1955) for his collection. 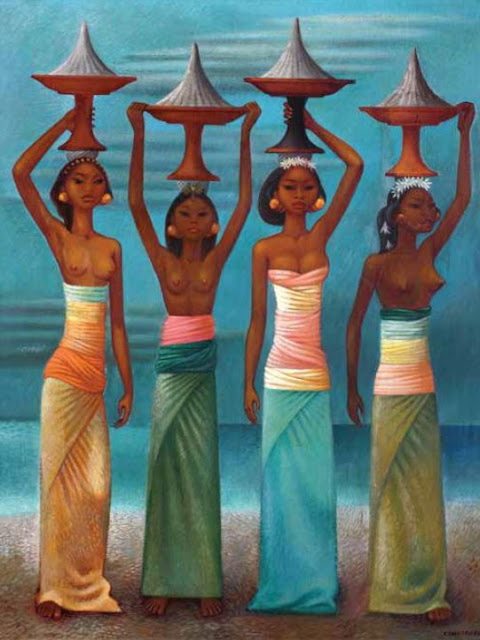 MIGUEL COVARRUBIAS
Empat Gadis Bali dengan Sajen
90 x 70 cm, 1933-1936,
oil on canvas
For three years in the mid of the 1930s, Miguel Covarrubias, an anthropologist and painter, had lived
in Bali. He came from Mexico. Besides paintings, he also made caricatures. He wrote an important book titled Island of Bali (1937). After its publication, this book contributed greatly to tourism in Bali. He finally returned to live in Mexico City where he continued to paint, illustrate and write. He used bird eye perspective in observing the social and cultural life of Balinese people. During his career he had produced at least hundreds of images of Bali and several dozens of paintings, including
the painting Empat Gadis Bali.
Through their works Migual Covarrubias together with Walter Spies and a number of other painters were considered as the main “travel promoters” for the island of Bali. Perhaps, Sukarno bought this painting in the 1950s through someone else. Unfortunately, in the book of President Sukarno’s collection, his name is written “Couangrukias”. Therefore, this opportunity could be used to correct his name. 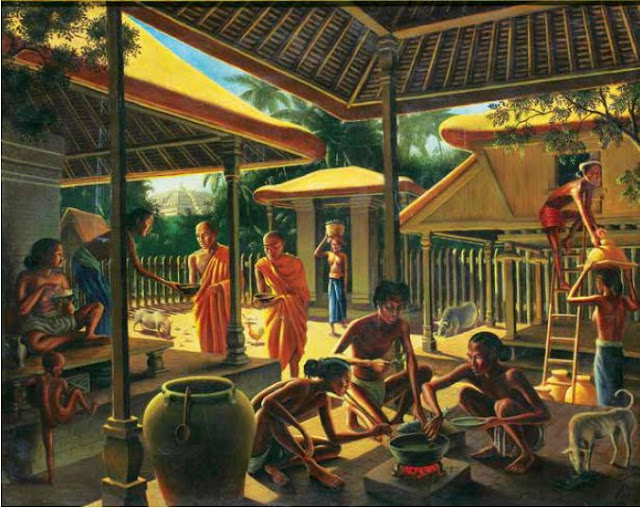 WALTER SPIES
Kehidupan di Borobudur di Abad ke-9
65 x 80 cm, 1930,
pastel on paper (het leek me eerder olieverf op paneel, maar ik kan me vergissen)
Together with Rudolf Bonnet, Walter Spies was a painter that had made contribution to the shaping of the history of modern visual art in Bali. He founded an organization named Pita Maha. Holding the principles of artistic knowledge and capacity of modern/western art, he was still able to visualize the images of people of Indonesian archipelago in their typical condition and oriental character. He applied element of light in his paintings excessively in order to animate his characters, figures and
compositions he built.
The painting Kehidupan di Borobudur di Abad ke-9 was completed in October 1930. It was included in the works he made by assignment as a painter to help picturing the cultural life of Java. To be exact, he was hired to serve as a partner of a renowned archaeologist, W.F. Stutterheim. Most likely this painting was collected by Sukarno in middle of the 1950s. 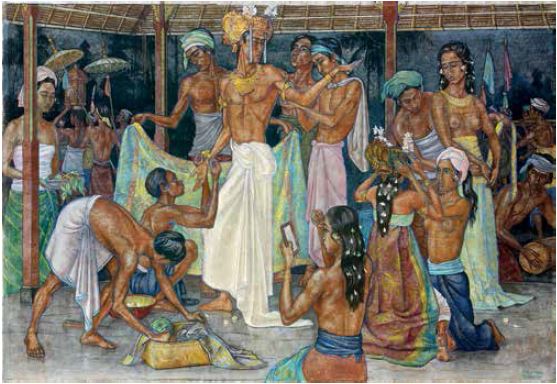 Penari-penari Bali sedang Berhias
105 x 150 cm, 1954,
pastel on paper
Bonnet had lived in Bali since 1928. Sukarno himself started to like Bonnet’s paintings since his exhibition in Jakarta in 1951, in which Sukarno ordered his paintings Bonnet for the State Palace. Bonnet got more and more familiar with Sukarno because the first president of Indonesia often came to his studio and had conversation with him. According to author Ruud Spruit, Sukarno collected 14 Bonnet’s works, one of which was Penaripenari Bali Sedang Berhias. In fact, the relationship of Indonesia and the Netherlands were not good at that time. Bonnet finally left Bali for Italy after refusing to paint a portrait of Sukarno in 1957.

LEE MAN FONG
Margasatwa dan Puspita Nusantara
49 x 162 cm, 1961,
tempera on paper
In 1960 Lee Man Fong was asked by President Sukarno to the palace painter in replacement of Dullah. Having considered it carefully, he finally agreed on condition that he was allowed to have an assistant. So, he asked Lim Wasim as his assistant, who worked daily. Therefore, Lee Man Fong did not go to the palace every day either to paint or to take care of its painting collection.
In 1961 Man Fong was appointed by Sukarno to work on aesthetic elements of Hotel Indonesia, Jakarta. In this project Man Fong was not the only one appointed, there were also some other painters. Man Fong did a mural titled Margasatwa and Puspita Indonesia. This work then was included in the palace’s collection and once was published in a Collection Book of Lee Man Fong version No. 35 vol. IV and now is displayed in Cipanas Palace.
In the making of Margasastwa and Puspita Nusantara he was assisted by Lim Wasim, Siauw Swie Tjing and Lee Rern (son of Lee Man Fong.) Sukarno’s involvement was strong in the process. Once a week he came to see directly the working process. “As the key designer, Lee Man Fong painted first on a paper as the master. It was then shown to Sukarno who then could give any necessary correction,
“said Agus Darmawan T., who since 2009 has become an Expert of Artwork Collection of the Presidential Palace.
This work is an archetypal and special painting. Although Man Fong is a versatile painter, only this time he painted marine life meticulously and elaborately.
Meer informatie over onze veilingen van Indonesische schilderijen:
René de Visser 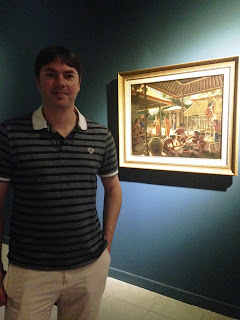