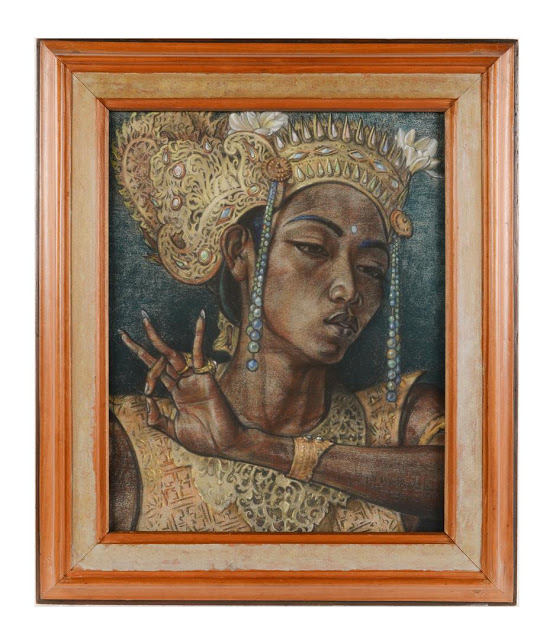 From 1911 until 1917, Rudolf Bonnet attended the Amsterdam Royal Academy of Fine Arts and 3 other schools in Amsterdam and Haarlem, giving him a broad knowledge and educational background. He lived and worked in the Italian village of Anticoli Corrado during the 1920s. Bonnet also traveled through northern Africa before embarking on a journey to the Dutch East Indies. He visited Java, Bali, and Nias in 1929-1930, and finally found his second home in Bali in 1931, after being mesmerized by Balinese dance performances. Bonnet developed an intense connection with Balinese culture and art forms. He founded Pita Maha in 1936, together with I Gusti Nyoman Lempad, Walter Spies and Cokorde Gde Agung Sukawati, preserving, developing, and maintaining a high artistic level of the Balinese arts and crafts. He initiated and designed the Ubud museum Puri Lukisan, and was highly respected by President Sukarno.

The dancer in the current lot is probably I Jemul (referred to by Bonnet as I Djemul or I Tjemul), who helped Bonnet around the house and the garden while he was living in Ubud from the late 1930s until 1958, when Bonnet was forced to leave Indonesia. Judging from Jemul’s age and from Bonnet’s drawing technique, this work can be dated late 1930s. Jemul is dressed up like a prince, although it is unsure which exact role he is enacting, and whether he is performing Gambuh, Arja or Daag (from the Janger). However, we are able to fully enjoy Bonnet’s talent to meticulously draw the beautiful ornaments on the dancer’s head, shoulders and neck. These are all made from buffalo hide, in a similar way that wayang kulit puppets are made. The leather is perforated in geometric patterns, gilded and decorated with small pieces of mirrored glass to give a suggestion of (semi-)precious stones. The headgear, adorned with two fresh frangipani flowers, contains two rows of reflective droplets. Typically, these are odd-numbered, similar to the number of roofs in a meru tower and the number of waves in an undulated keris. With a subtly cast shadow, Bonnet shows that the badong (the triangular necklace ornament) floats just above the sesimping (the rigid vest with its typical pointed shoulder elements), giving the drawing a dynamic feel. In the dancer’s neck, one can just see Garuda Mungkur, the mythical bird Garuda, its head pointing backwards to protect the dancer from evil spirits. The dancer’s hands are in a specific position. According to ancient Indian philosophy, hasta mudra (hand gestures) have specific meanings. The fingers represent the elements; fire, air, space, earth, and water. When the tips of the thumbs and the middle fingers touch while the other fingers are kept straight, a so-called akash mudra is formed. It is believed that this mudra boosts intuition power and alertness, and purifies emotions and thoughts.

Rudolf Bonnet visualized Balinese actors and dancers many times throughout his life. From the early 1930s until his death in 1978, Bonnet drew and painted Arja, Keris, Gambuh, Joged and Legong dancers. This particular drawing is embued with a very intimate energy; it combines Bonnet’s passion for the renowned Balinese dances -which in 1931 were an important reason for him to permanently move to Bali-, and a Balinese young man who has been close to Bonnet for so many years.