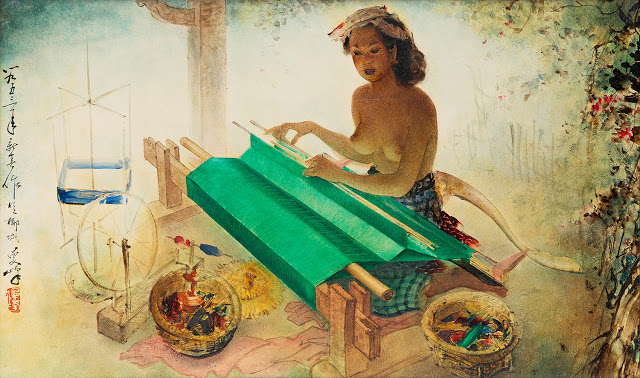 ‘Lee’s work shows such grand, sometimes mystic nature of the Indonesian scenery, as very few Europeans were able to do; he renders the people with the artlessness, grace and humour, which can only be obtained by observation and understanding. […]…his spiritual home is interpreted in the art, and subject matter is but a vehicle. This transcendental conception of subject matter leaves the artist free in orchestration. It enables him to compose the higher elements of visual art within the laws of harmony and symmetry. […] Lee Man Fong […] was deeply imbued with the spirit of his ancestral home, his native traditions and culture. Deep though Lee’s roots are, they never led him into sentimentality or excessive nationalistic feelings. It is the abstract qualities of his forms, his pictorial structure and emotional use of colour, which are the music of painting, that make his paintings cosmopolitan.’(Alexander Dickman, The Studio, April 1956)
Born in Guangzhou, China, raised in Singapore and going through his formative years in Jakarta when it was under Dutch, Japanese, and ultimately Indonesian rule, and living in the Netherlands in the years following World War II, Lee Man Fong was inspired by many cultures and teachings. In the course of his career, Man Fong reinvented his Chinese heritage, switching from the European impressonist way of painting into a more calligraphic way of handling his brushes, painting onto long-stretched boards.Lee Man Fong was also known to enjoy the indigenous culture of Bali. He frequently portrayed Balinese cockfighters, rujak sellers, dancers and weavers. In the current lot, we see a bare-breasted Balinese young weaver, sitting at her loom. Weaving has been an established craft for ages in Bali. Not only the most beautiful songket, endek, geringsing and other textiles are woven, but also more day-to-day objects like baskets, lontar and book covers are woven from local leaves. Traditionally, a young girl is paired with an older woman, learning the basic skills of weaving, before advancing into more complicated patterns.
In Man Fong’s current painting, the young woman is seen weaving a textile with a plain colour, naturally dyed in emerald green. The way Man Fong depicts the weaver, her loom, the weaving shuttles and spools of thread, shows he had a profound knowledge of this craft.
Notably, he chose to use a painting style that was more Chinese than Western, although he was trained in both:‘Though he has been exposed to strong Western influences, the Chinese predominate – and the mixture of these widely divergent traditions did not lead to a hybrid, inwardly inconsistent whole, but to an artistically sound style.’ (Hans Rookmaker, Trouw, May 24, 1950)
Lee Man Fong dared to apply a traditional Chinese way of painting, to portray a traditional Balinese subject, just a year after returning from the Netherlands, where he had stayed for five years. This unique transcultural mixture makes Man Fong’s oeuvre so distinctive. Furthermore, he broke free from the restrained earth tones he had been using in the preceding years, now favouring energetic, saturated colours in the foreground, while the earthy backdrop still subtly echoes his past as a Hague Schoolinfluenced artist.
‘Like a single word, said in the right way, can be far more convincing than an elaborate speech, in the same way Lee Man-Fung has reached maximum expression portraying a single figure, without the necessity of adding anything else. Furthermore, there is the dynamic elegance in his design: the interaction of the horses, the calm of the birds and the labour of the weaver. It is all elegant and unstrained, intuitively graceful, in no way imposed. Lee Man-Fung is the portrayer of the ingenuous, of the pure, of the truthful. In every brushstroke, the love of this emphatic human soul is expressed. Lee Man-Fung knows Silence, and he cherishes her; he knows Joy, and he himself enjoys it.[…] This art comes from the heart, and will go to the heart.’(Corn. Basoski, De Nieuwe Haagsche Courant, May 1950)
Gianni Orsini MSc. May 2019
Provenance: Acquired by a lady collector in Indonesia or Singapore. Born in Surabaya in 1914, she was a close friend of Gerard Pieter Adolfs (1898-1968). Later she lived in Australia and Hong Kong as well, and passed away at the age of 99 in Texas, USA. Her daughter, the current owner, lives in Paramaribo, Suriname. She is a direct descendant of Raden Mas Ario Adi Pandji Tjokro Negoro from the father’s side of the family.
Literature reference:A painting with same subject, size and year can be seen in: Siont Teja,Lee Man Fong – Oil Paintings Volume II, Art Retreat, Singapore, 2005, p. 49.
More information about our auctions of Indonesian paintings(veilingen van Indonesische schilderijen):
René de Visser
Zeeuws Veilinghuis
rene@zeeuwsveilinghuis.nl
www.zeeuwsveilinghuis.nl