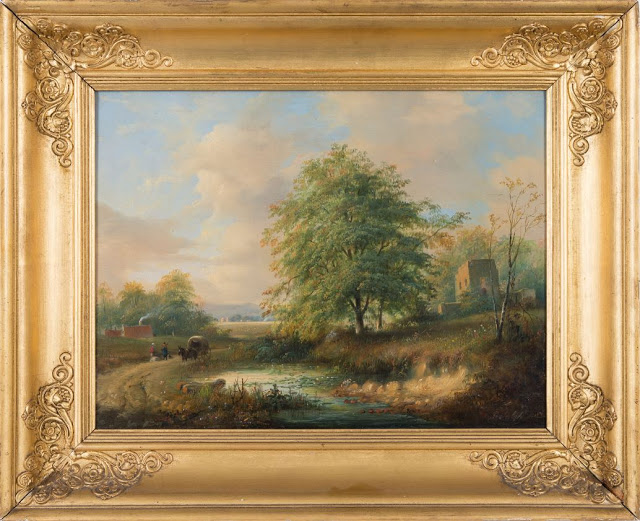 Raden Saleh was a Javanese painter born in 1811 to a prominent family of administrators. His father was governor for Semarang, a city that was an important regional centre and port at that time and still is today. Saleh’s official name was actually Sarief Bastaman Saleh, while Raden was a nobiliary title given to descendants of several royal families that originated form the Indonesian islands of Java, Madura and Sunda.
In order to learn the profession of painter Saleh sought to become an apprentice to various respected and well-known artists. In his homeland he was taught from the age of eight by his first mentor the Belgian painter Antione Payen, once commissioned by the Dutch King William I to create a series of pictures depicting the Indonesian landscape, who recognized Saleh’s talent. Saleh moved in 1830 to The Hague in the Netherlands and received further education from the famous landscapist Andreas Schelfhout, who sometimes is described to be the most influential Dutch landscape painter of the nineteenth century, and Cornelis Kruseman, a portraitist.
In 1839 Saleh decided to travel through Europe, to countries such as Germany, Austria and Italy where he visited various courts that would commission him to create portraits of several members of the European nobility. During this time Saleh spent five years working as a portraitist for the German duke Ernst I of Saxe-Coburg-Gotha at his court in Coburg. In 1845 Saleh continued his tour through Europe and went to Great-Britain and also visited Paris together with the French painter Horace Vernet, who was celebrated for his beautiful historic and oriental pictures.
Seven years later Saleh returned to Indonesia where he started occupying the prestige position of conservator for the colonial collection of government art. This didn’t mean that Saleh had dismissed his creative side, he kept on working as a portraitist for the Javanese aristocracy and also painted pictures that captured the beauty of the Indonesian landscape. Saleh died in 1880 shortly after his second travel to Europe. It was reported by the Javanese newspaper that his funeral was "attended by various land lords and Dutch officials, and even by curious students from nearby school."
This landscape is made by Saleh in the year 1832, during the time that he was still a young man living in The Hague and taught by the Dutch painters Schelfhout and Kruseman. The picture shows a idealistic countryside, with a farm on the left, a little lake in the foreground, a big tree in centre and on the right a ruin. It’s clear that Saleh was influenced by the works of his mentor Schelfhout, who also often used these same elements to create romanticized pictures. The painting doesn’t seem to depict a landscape that one can find the Netherlands, but perhaps rather in Germany or Italy.
Nowadays paintings by Raden Saleh are very sought after: he holds the auction world record for Indonesian paintings. In 2018 a large painting by him was sold for € 7.200.000 (hammer price).
Jacquelien van den Acker, 6 september 2019
Information for this article was found in:Scheen, Pieter, Lexicon Nederlandse beeldende kunstenaars, 1750-1950, 1969, vol 2, p. 281.Beyer, Andreas; Savoy, Bénédicte; Tegethoff, Wolf; König, Eberhard, Allgemeines Künstlerlexikon : die bildenden Künstler aller Zeiten und Völker, 1992, pp. 443-445.
More information about our auctions of Indonesian paintings:
René de Visser
Zeeuws Veilinghuis
rene@zeeuwsveilinghuis.nl
www.zeeuwsveilinghuis.nl